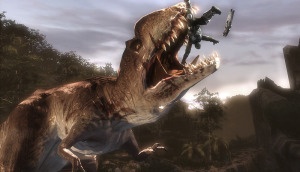 Say what you will about the Nintendo 64, but it had some great shooters. Goldeneye and Perfect Dark are what drew me to the genre in the first place. And, despite its fog-shrouded eccentricities, there will always be a special place in my heart for Turok: Dinosaur Hunter.

The combination of over-the-top alien weaponry with the hands-off, only-in-the-manual approach to storytelling left an oddly flavorful impression on me. It boiled itself down to the essentials: Go forward, kill everything. It's an uncomplicated formula, and I assumed it wouldn't be difficult to resuscitate.

But no, they had to complicate things.

Rather than the original's taciturn, time-traveling Native American hero, the Turok of this new iteration is a generic, future-military-style, Native American action-hero... with a dark past. Disillusioned by the brutality of his unit during what the plot basically reveals to be the Vietnam War (of The Future!), Turok is tossed in with a group of grizzled soldiers who hate him. The mission: Capture the leader of his old military unit.

Also, there are dinosaurs.

For me, unique weapons are a large part of the draw when it comes to FPSes. I can mow down foes with a shotgun, pistol or pulse-rifle in any old game. So when it came time to play Turok, I had one main goal: Kill dinosaurs with a bow. But the game wanted none of that.

Your two constant weapons are a knife and a compound bow (your other two slots are interchangeable). Both are touted as stealth weapons, but the practice is thoroughly restrained, especially when it comes to hunting dinosaurs. When you come across a group of commandoes, your cohorts will almost invariably send you up to slit a few throats before the assault. Dinosaurs, however, never seem to spawn until you drop off a ledge. Then, what was previously an empty forest glade becomes a Jurassic Park nightmare. And you're forced to whip out the fast-shooting future weapons to survive.

The designers seem to rely on a lot of unfortunate shooter tropes in order to engineer tension. You'll be wandering down a dark, vacant corridor and stumble upon some raptors chewing on bones in the distance. They don't see you at first, but as you move into range you're blindsided by a raptor from nowhere and forced into quick-time "don't eat me" event. And, of course, the commotion alerts the ravenous creatures to your oh-so-juicy presence.

I can buy the inter-dimensional monsters in Half-Life appearing out of the ether, but dinosaurs don't do that - I don't care if they're from space.

And the final little annoyance is the old favorite: Everybody Shoot at The Protagonist. Everything alive, friend or foe, hates Turok. Maybe it's the haircut? I don't know

On the lighter side, it's an attractive game. If you have a secret lust to gawk at a fresh dinosaur corpse, its fatal wounds still slick with gore, you won't be disappointed.

The environments are fairly repetitive - forest, military complex, cave - but they're easy enough to navigate: Just head for the next ledge that drops you into the slavering jaws of another prehistoric predator.

But beyond all that, what really disappointed me was the multiplayer. Oh sure, there are dinosaurs tossed in for flavor - and I applaud that - but what would have really knocked it out of the park and elevated this otherwise bland shooter to the level of "must-own" would be allowing playable dinosaurs vs. humans.

This thought has rooted itself in my mind, giving me dreams of squad-based raptor combat or peering through the eyes of a lumbering T-Rex, with its motion-based vision. It stirs a tingling feeling deep within my loins - or wherever you feel such things, I don't know anatomy.

Bottom Line: Visually attractive, but ultimately shallow. Turok is nothing special - and the market isn't exactly hurting for shooters at the moment. The only lasting impressions it left behind were dreams of what might have been.

Thaddeus Stoklasa travels the globe in a steam-powered airship. Listen to him and his compatriots judge other people's creations at http://threegeek.blogspot.com.