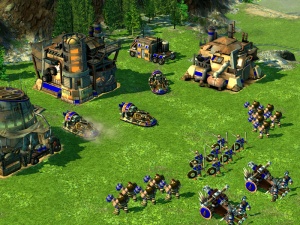 Imagine: you're a game developer picked up to create a sequel for one of your favorite real-time strategy franchises. The resulting game is complex, and though its potential market may be limited, the game's complexity grants it a richness and historical scope that is rare within the genre. While your sales aren't world beating, fans of the original are happy and your reviews are about the same area as the original. A third installment is given the go-ahead.

Only this time, the higher-ups want those world-beating sales. They've got data that says your game was too complicated for the majority of the market, and didn't really reach gamers who weren't already fans of the original. Would it really kill you to be more like the big guys?

So you simplify. You gut your economic systems until resource gathering consists of, well, gathering exactly one resource, called "resource." Instead of a multitude of historical civilizations, each with its own slight tweaks, you implement three very distinct factions, ala StarCraft. You reach far back into the past to please those elusive casual fans, emulating the cartoonish look and witty one-liners of a WarCraft title. You sharply decrease the number of historical eras the game traverses, as well as the number of decisions that need to be made along the way.

But as development progresses, you become resentful: this is not the game you signed on to make; it is not the game you loved; and you're not even certain if it's fun anymore. You start to picture the hypothetical gamer you're doing all these things for: the gamer without the patience to appreciate complexity, without the knowledge to understand the historical subtleties, the gamer whose existence is ruining your game. Before long, you're stuck making a game for this guy, and you hate him.

Everything here is broken. There's a zoom function, but its widest angle isn't anywhere near wide enough. There are armies, but they won't go anywhere without strenuous babysitting. There are multiple epochs of history to play around in, but every battle is more or less the same, regardless of the millennium. There are memory leaks which can stop the show even on impressive systems after a couple of hours of play.

Empire Earth III is indeed much simpler than its forbearers, and it would be hard to imagine anyone familiar with the genre having trouble picking up its meager concepts. But even this simplicity is not pulled off without a hitch: it turns out imposing a Protoss/Zerg/Terran-type trichotomy onto a nominally historical game has the potential to come across as, um, kind of racist.

The system is essentially this: the West specializes in research and has more effective units with correspondingly greater costs; the Far East, quoting from the manual, "relies heavily on large quantities of cheap, agile infantry units;" the Middle East, for its part, "excels at the element of surprise, as well as hit-and-run tactics." So what have we learned? Western culture advances more quickly, and Western lives are explicitly worth more than others. Asian culture is largely defined by there being a whole lot of Asian people. And Middle-Easterners are, you know, terrorists. I'm just saying.

Some part of this issue is unavoidable when you decide, as I mentioned, to separate real-world cultures into opposing forces that work fundamentally differently. The distinctions you make between cultures inevitably form an argument about the character of the people from each faction. But Empire Earth III goes even further by making each choice a bizarre concoction of the stereotyped and the ahistorical. Throughout most of history, for example, China held a huge advantage in military technology over the Western world. Persian and Arab armies were feared for their heavy, rather than light, cavalry. Neither a lack of historical accuracy nor a tendency toward stereotyping peoples and cultures would, on their own, be especially remarkable within the game's setting and ruleset. It is in combination that they produce a bizarre and unacceptable result.

The game's single-player campaign is a Rise of Nations-style world domination metagame, with its own turn-based strategy elements. A lot of the systems here are fun, but, once again, there are fatal flaws: First, playing within a campaign means that, for the most part, you do not advance epochs in individual battles, removing yet another level of complexity from these skirmishes. Second, and more exemplary of the scorn this game exhibits towards players, are the battles against native tribes, which comprise the entirety of the first part of the campaign. These fights are never challenging, but they are inexplicably the only ones that cannot be skipped in favor of auto-resolution. Thus, for the first part of its only significant single-player experience, Empire Earth III forces you to do things that aren't fun, and then forces you to do those same things a few more times.

Bottom line: Mad Dog is obviously capable of putting out a proper Empire Earth game, so it's a little unclear what happened here. There are bugs, but the problems with this game go much deeper than can be explained by a rushed release schedule. Empire Earth III is a monumentally wrong-headed release. And the pathfinding is really, really bad.

Recommendation: Don't touch it, unless you hate yourself as much as this game seems to.