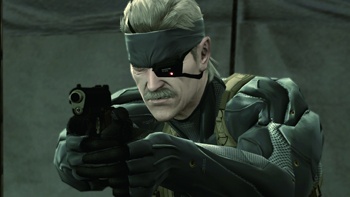 I think the gaming writers of the world need to place a moratorium on applying traditional review standards to Hideo Kojima's games -- particularly those of the Metal Gear Solid franchise.

The problem with comparing Metal Gear Solid 4 with other games is that it completely obliterates any other digitized attempts at storytelling. It's almost an unfair comparison. Contrasting the hyper-nuanced, politically and spiritually weighted, continually surprising plot of this latest edition of the franchise to even the finest games in recent memory (say, Grand Theft Auto 4) is tantamount to comparisons between Uwe Boll's Postal and the works of Stanley Kubrick.

That's not simple hyperbole either.

While most games are content to present a rather straightforward plot in the vein of any Hollywood action flick, Metal Gear Solid, like Kubrick's films, has always been defined by its circuitously branching plot details that almost always border on incomprehensible to those not taking detailed notes and consulting Wikipedia every 20 minutes. MGS4 does much to help tie up the vast number of loose ends created throughout the history of the series, but that feels like as much of a failing as a victory, given its predecessors.

By combining every relevant character and location from the last decade of MGS titles, Kojima has seemingly given into the cheap, immediate thrills of fan service. Whereas his games previously stood alone, MGS4 relies so heavily on past titles as to render its story much less poignant for those who missed any earlier entries.

Thankfully, the same issues don't apply to the gameplay.

I won't lie and say the controls are intuitive -- they aren't -- but after an initial half hour of learning the more advanced maneuvers, you'll be slitting throats and diving into cover like a pro. As a reward for learning the complex mechanisms, the game is filled with clever, inventive, resourceful uses of every single item and action in your inventory.

Without giving away too much of the plot, I can reveal that at one point in the game you're tasked with trailing someone through the streets of a city that looks suspiciously like Prague by night. Not only do you have to stay out of sight of your target, but you're also asked to avoid detection by randomly patrolling soldiers. Just when you think you've got the hang of that, your target is arrested and you're forced to make snap judgements on how to free him.

Do you kill his captors from the shadows and risk blowing your cover? Do you stay hidden and hope for the best? The game is filled with these sorts of branching decisions, most of which have no "right" answer. By allowing players the freedom to make their own decisions during missions, the otherwise linear game provides a shockingly deep impersonation of open-endedness.