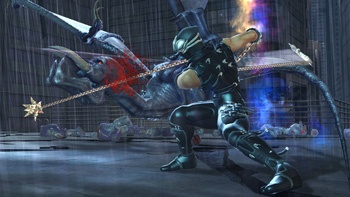 Ninja Gaiden 2 is, at its heart, a classic brawler in the tradition of Final Fight and Streets of Rage. Players control a single character, master ninja Ryu Hayabusa, and guide him through a multitude of levels while facing down mobs of enemies ranging from cuddly, death-dealing dogs with swords in their mouths to ravenous demons spawned from the pits of hell. Regardless of enemy type, they all die the same way: in bloody pieces.

Ryu has an arsenal of combos and other means of grisly carnage at his disposal but mastery of some form of technique or strategy will be required to make any kind of progress in the game. It's convenient then that Ninja Gaiden 2 boasts incredibly responsive, easy-to-use controls. A few quick button taps can send Ryu sprinting along a wall and vaulting across a chasm before dispatching an enemy with a vicious decapitation. Within the correct context, a single button tap can cause Ryu to bisect a demon from head to crotch. The control scheme is based on an economy of button-pressing. No button-mashing is required nor will it get the player very far; Ninja Gaiden 2 rewards precision and a zen-like attitude towards combat.

As smooth as the player controls are, it's a shame the same can't be said of the camera controls. Knocking the camera controls of a third-person, 3-D game might be old-hat by now, but it's really an amazing contrast between how easily players control Ryu, and how slow, plodding, and difficult it is to get the camera to a comfortable viewing point. The camera also has the ability to move on its own and put itself at really awkward positions in the middle of combat. Not a fabulous feature in a game this difficult.

Combos and attacks are so plentiful, the problem isn't just remembering how to pull them off, but deciding which attack would be the best for any given situation. Nothing is outside of the player's reach with practice. This challenge is the best aspect of Ninja Gaiden 2 and also its greatest detriment, at least as far as playability is concerned. This game is not designed with every player in mind.

Enemies are intelligent and aggressive; while they won't attack the player en masse, they will not hesitate to attack first, nor will the second attacker give the player any kind of breathing room upon dispatching a first. The game itself won't give players any kind of breathing room, dropping them into combat as soon as the first cut scene ends; Ninja Gaiden 2 is all about on-the-job-training. As I mentioned before, button-mashing will get players nowhere, and this is also one of the first brawlers where blocking will do nothing but help you; a well-timed block and counter-attack is essential to defeating the larger mobs. Luck will only take a player so far - the names of the game are practice and timing.