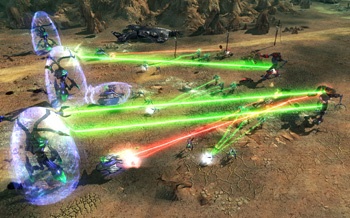 "Wow, Command & Conquer 3: Kane's Wrath is actually pretty enjoyable," I uncharacteristically monologued to myself.
"The controls are a bit complex but as this is a strategy game, that's forgivable. And they've really done the best they could. After all, it can't be easy to shrink all 108 possible keys of a keyboard into an Xbox 360 controller," I added.

"And once that was accomplished it was just a simple matter of porting the PC game directly to the Xbox 360 hardware. It's not wildly different from past Command & Conquer games, but that's the key to it, I think."
"Fans would be confused if it diverged too much, and by adding a few new units here and there (including the awesome new, super-expensive, super-deadly epic units) and new factions that are basically just offshoots of old factions with new innate powers, EA has really done an excellent job treading the fine line between pissing off old fans with too much innovation and ignoring possible new fans by leaving the game too stagnant!" I marvelled, fully realizing how strange it was that I was sitting alone in my living room narrating my thoughts to myself like some kind of Stan Lee supervillain.

That's when the shirt started contradicting me.

I didn't think I'd ever be cliche enough to actually own a Che Guevara shirt, but they give them away for free with every tattoo in this city, so I probably have a whole closet full of them by now.

Anyway, that's not important. Che Guevara was speaking to me from beyond the grave, and he had a serious bone to pick with "the corporate fat cats."

"You know this is just a cash-in, right?" Che asked.

Startled, I managed to mutter: "Huh? Who said that? Oh. Che Guevara shirt ... talking to me ... Great. What was that about cash-ins?"

"The game. It's already been released once. Half of it has anyway," he replied.

"Command & Conquer 3: Tiberium Wars. The original game. It was released for the Xbox 360 almost a year ago. This game, Kane's Wrath, is just that game with an added expansion pack tacked on that Electronic Arts is reselling to the fanbase -- those who Marx called 'proletariat' -- for another $60 each."
I had to admit, the shirt was pretty savvy on EA's marketing ploys, but he apparently missed the memo on this one.

I had confused my shirt. "So it adds new modes above and beyond those found in the PC version of the game, but keeps all the old content of the original Command & Conquer 3?"

"See!" the shirtman screamed. "They're starving their brothers in the street! Instead of releasing a downloadable expansion for a game people already bought, they've ported the meager expansion pack, slapped a $60 price tag on it and are reselling it to gullible fans. They've declared intifada on the fanbase!"

I think maybe he was drunk. Or I was. Whichever one of us was imagining him was somehow not right.
"Che, it's only $40."

"Kane's Wrath. The Xbox 360 version is only $40. Yeah, it's not as cheap as it should be, but when you take into account the huge number of bonus missions EA has thrown in and the convenience of not having to waste space on your Xbox 360's hard drive by downloading an expansion, it's not a terrible deal. Plus, the expansion campaign is pretty enjoyable," I promised the raging shirt.