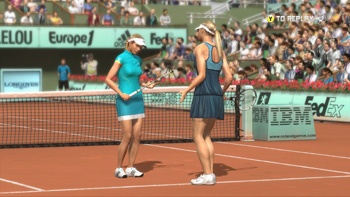 I tend to approach sports video games the same way I tend to approach children: I avoid the hell out of them. If I can't avoid them, then I handle them with a thick pair of gloves and a set of tongs. Yeah, I know, some people love 'em, but some people also like to play with scorpions, too. Hey, to each his own. Anyway, I'm rambling: the bottom line is that I recently sat down with Top Spin 3 and, much as I hate to admit it, came away impressed.

The idea behind Top Spin is to take an original tennis player and gradually increase their ranking to that of a world champion (choosing which products to endorse after you achieve glory and fame is probably a feature for Top Spin 4, as will be the minigame about how to weather scandals for engaging in naughty activities like match-fixing). It doesn't sound all that difficult, in theory, but the game does its damndest to make this goal insanely tough to actually pull off. This is because it takes a while to learn how to play the game and then work through the prerequisite matches in order to actually compete as a pro. Once you get to this point, provided you haven't gotten bored and moved onto something else, you'll find yourself in store for a surprisingly involving gameplay experience.

I'm not sure it's possible to actually make a bad tennis game, in all honesty. After all, they're based on the same basic premise as Pong, and things were pretty solid even back then. Until developers start adding in portions where players have to fend off knife-wielding fans , it's probably safe to assume that gameplay isn't ever going to deviate too much from the basics. In spite of this lack of combat, Top Spin 3 is a really deep game... so deep, in fact, that it's nearly impossible to remember all the different moves that you'll find at your disposal. That's the game's biggest problem, actually: there's so much to learn that if a player just tries to play the game without learning the moves, their opponents are going to wipe the floor with them. Thankfully, the developers have provided a fairly comprehensive tutorial, though even that will take some patience to complete.

Learning how to play Top Spin is way harder learning how to play tennis in the real world. The game's tutorial is reasonable at some points, and frustratingly vague at others, but once you master its lessons, it's pretty easy to advance through the game's ranks. There's an RPG-like element where winning matches and tournaments nets XP rewards, which are then used to beef up a player's stats. The further you progress, the tougher the matches become, and the game quickly becomes a serious time investment with one bout on the court sometimes taking up to an hour to finish. The leveling-up of my characters was actually my least-favorite part of the game, mainly because I had to listen to the same maddening music (I have never been a Jamiroquai fan) when dealing with the upgrade menu.