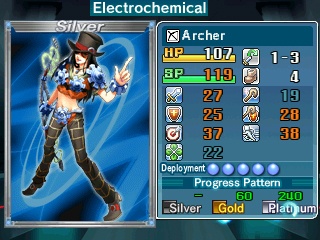 Each character you create has a limited number of times it can be deployed before it's gone for good. The higher the character's level at creation, the fewer deployment points it has at its disposal, means that players will constantly have to rebuild their armies in between battles. Liberated cities contain "rehearsal rooms" that can be used (without losing deployment points) to earn the level-building spheres used for character advancement, so a lot of time will be spent in these areas, as well.

Since Song Summoner was created for the 5th generation iPod (with video) and the new Nanos, the game's controls are all built into the click wheel. As a result, all menus and units can be scrolled through with a very user-friendly interface. The only problem I ever encountered was that the wheel was a little too sensitive and I sometimes overshot what I wanted to select. The other downside is the game drains battery power pretty quickly, too, sometimes requiring a charge after only two hours or so.

If you're looking for a new game to waste time with, Song Summer: The Unsung Heroes is an excellent candidate. Not only is it well-made and easy to get into, but it's just a lot of fun to play. Plus, if you're on your way to work, you won't get nearly as many weird looks from other passengers as you would for playing a PSP while wearing a suit.

Bottom Line: Song Summoner: The Unsung Heroes is a delightful tactical RPG, especially for those of us who don't walk around with enough pockets to carry more than our iPod, phone, and wallet. It's a perfect way to kill time on a bus or train ride, and its simple interface and fantastic auto-save system makes it a perfect title for even those who fancy themselves as casual gamers.

Recommendation: Buy it. It's only $4.99, which means that it's both cheaper and more fun than Final Fantasy X-2 ever will be.

Aaron Stack once fought off an invading army of mutant koala bears by singing a drunken rendition of "MacArthur Park." No one is sure if the bears or the song were more terrifying.