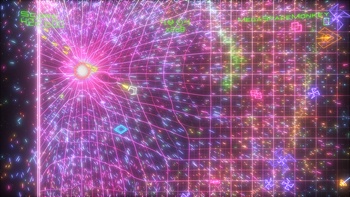 Released in 2005, the original Geometry Wars: Retro Evolved could be considered a proficiency test in game playing skills, challenging players with the very essence of high-end gaming. At its core, Geometry Wars is a manic, dual-stick shooter that favors the quick and the coordinated, making short work of those with low response mechanisms. It also confronts players with their ability to overcome an epileptic fit (as cautioned in game manuals everywhere), bombarding them with more colors than a Norwegian laser rave.

As such, your Geometry Wars score may very well be a direct reflection of how proficient you are in your favorite hobby. That said, you'll be thrilled to hear that its sequel, Geometry Wars: Retro Evolved 2, is much more accessible.

No longer content with simply dumping you into the middle of a colorful, geometric nightmare, the developers at Bizarre Creations have expanded upon the original formula, streamlining and implementing the best elements from their previous efforts while tossing in a few new ideas as well. The result is a game broken into six distinct gametypes that are carefully doled out over the course of about an hour's worth of play. The progressive nature of GW2 quickly becomes one of its most compelling elements, easing newcomers into the fold while teaching all the elements of the game within a brief, entertaining space of time.

The core of the experience has been greatly improved for long-time fans as well, particularly the skilled. Small, collectible dots called "Geoms" have returned from the Nintendo-only Geometry Wars: Galaxies and are here to serve two purposes: to raise your score multiplier and in turn, increase the difficulty. Essentially, the faster you destroy enemies, the more quickly you can get to the good stuff, eliminating the slow burn of starting over anew, waiting until you hit your first million points for things to get interesting again, as was the case in the original Geometry Wars. Other changes under the hood include keeping your score multiplier upon death, a new spawning method that makes it much less likely for fresh enemies to appear on your ship (killing you instantly, I might add) and of course, brand new shapes to throw fits over.

Your tour of the grid begins with Deadline, which couldn't possibly be more of a riff of last year's Pac-Man Championship Edition unless it were to change your ship into the ghost-devouring beast himself. With three minutes and infinite lives to rack up the highest score possible, Deadline represents both a teaching environment to new players and the ultimate torture test for Geometry Wars veterans. This bite sized version of the classic gameplay sounds brilliant on paper -- and it is -- until these three minutes become a mobius strip of high scores and curse words that leads long into the night.