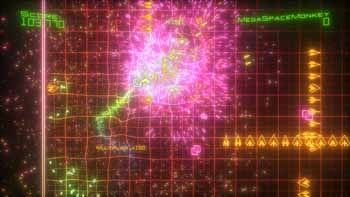 King provides the next challenge as it features a constantly respawning set of collapsing zones that act as safe areas throughout the field, keeping enemies at bay. They're also, cruelly enough, the only place where your weapons function, leaving you completely defenseless once outside the protective zones. The notion being that while it's relatively easy to stay alive, playing it safe won't net you as many Geoms which in turn, will seriously dampen your score.

The appropriately named Evolved mode follows and as one would expect, it closely resembles the original's free form style. Admittedly, this is the least interesting of the bunch, but it's also the only place to see exactly how intense the game can get over the course of a few million points.

Inspired by an achievement from the original title, Pacifism strips you of your weapons, confines you to a much smaller field and makes your only way to retaliate against an endless wave of blue triangles to pass through energy gates that destroy all nearby enemies. Afterwards, it's on to Waves, where one must surf, squeeze and generally survive an increasingly dangerous onslaught of omnidirectional missiles, just like the version of Geometry Wars found within Bizarre's other series, Project Gotham Racing.

Finally, Sequence provides the only level-based gametype, challenging players to reach the end of a 20 round gauntlet, with a mere 30 seconds to complete each section. Each of these games can be played with up to four players in both competitive and co-operative settings, but only locally. No online pew-pew for you, a fact that Bizarre Creations blames on latency being absolutely detrimental to the experience. I can respect that and after playing multiplayer Geometry Wars, I feel that it's best left a single player experience anyway. Competitive King makes for a compelling argument as a party game, but there's nothing here that can compare to running the grid into the millions all your own.

The inclusion of scoreboards built directly into the menus and in-game interface is as brilliant as it is completely diabolical. The original Geometry Wars was often praised for its ability to get folks comparing high scores like the 80's never went out of style, but this time around it's impossible to avoid. Next to each and every gametype are the top five scores of your friends, just sitting there, waiting to be crushed. This continues into the game where the top score amongst your friends is posted in the top-right corner and is updated on the fly should that record be shattered. It's a beautiful thing, really, and one that I wish more games of this type would adopt.

Bottom Line: This is the dual-stick shooter polished to perfection. Players of all different types and skill levels are bound to find a game to fall in love with amongst the six available and for the competitive folks like myself, the leaderboard implementation is enough to keep you going for months.

Verdict: An absolute must-have for Xbox 360 owners. Even if you don't think you'd enjoy this type of game, trying out the free demo wouldn't hurt.