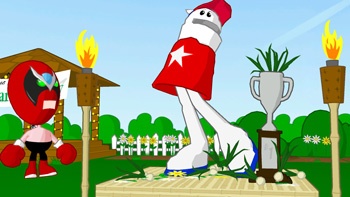 There's something about embarrassingly long titles that never fails to capture my heart. Like the 1984 classic film The Adventures of Buckaroo Banzai Across the 8th Dimension, or the more recent Indiana Jones and the Kingdom of the Crystal Skull, Strong Bad's Cool Game for Attractive People - Episode 1: Homestar Ruiner is a mouthful. And, like those others, it's also genuinely entertaining, provided you don't take things too seriously.

The first in a five-part monthly series of downloadable WiiWare games, Strong Bad's Cool Game for Attractive People - Episode 1: Homestar Ruiner plays like a love-letter to the heyday of classic Sierra and LucasArts adventures as you point and click your way through the bizarre, animated world of Homestarrunner.com.

For those unfamiliar, the titular Strong Bad is a vaguely villainous - or at least misanthropic - resident of Free Country, USA, and fills up his copious free time answering stupid e-mails and antagonizing his younger brother and neighbors. Also, he wears boxing gloves and a Mexican wrestling mask for some reason.

Sitting through a few of the Strong Bad e-mail segments at Homestarrunner the quickest way to judge if you'll miss your ten bucks once it's gone, as the game itself was formed in collaboration between the cartoon's creators and Telltale Games, the masterminds behind the current Sam and Max series.

Graphically, SBCG4AP is spot-on. Everything from characters to landscape is an unflinchingly accurate, 3-D extrapolation of the cartoon series. The controls, however, gave me some issues. Nothing major, it's just that when they say "point-and-click" they really stick to it. Movement is controlled solely by selecting where you want to go or what you want to look at, even though your thumb is resting right on the Wii Remote's d-pad. Personally, I'd find it more intuitive to be able to guide my character with said d-pad instead of just clicking non-stop, but you'd have to stretch that a long way to turn it into a legitimate complaint.

Cool Game is the typical adventure game fare: acquiring strange items from arguably stranger characters, navigating dialogue trees, exploring a variety of locations and making prank phone calls. It doesn't go out of its way to break new ground, but what's there feels solid enough. Telltale has been doing this for a while now, after all.

The story follows Strong Bad in his quest to mock, pummel and/or otherwise humiliate Homestar Runner after an e-mail prompts him to do so. Unfortunately, everything backfires, as cartoon-villain plots tend to do. The publically-shamed Homestar moves himself into the Strong House, leaving Strong Bad with no choice but to clear his nemesis' name - through a combination of theft and cheap masquerades - in order to kick his pasty butt to the curb.

If you get bored, mini-games paying homage to the bizarre side of classic gaming or some absurd, hand-drawn, Teen Girl Squad antics offer a diversion from the main plot. If there are two things that blend together better than point-and-click adventure games and nonsensical, cartoon logic, I've yet to come across them in my admittedly sheltered life.

Upon completion, players can continue to navigate the game world to search for unlockables as well as hassle other characters for some story wrap-up, which is always appreciated. And, naturally, there's a preview of the next episode. Considering how expensive movies are these days, I'd definitely say it's worth the ten bucks.

Bottom Line: It's not particularly lengthy, but who cares? It's good for a laugh and, with intentional humor being rather thin in the console gaming atmosphere at the moment, that's a particularly refreshing find. Hopefully, this will open the floodgates on classic adventure-style gaming and soon the Wii will be drowning in my favorite genre. Hey, a guy can dream, right?

Recommendation: Buy it if you dig pointing, clicking and/or weird, internet humor. Not as great as Sam and Max, but a whimsical, nostalgic-style romp nonetheless. If you have 1000 Wii Points - or a PC and some regular money - burning a hole in your digital pocket, you could do a lot worse.

Thaddeus Stoklasa is completely invulnerable to every substance in the Universe except fragments of his home planet... which is, unfortunately, Earth. Check out more of his ramblings at http://www.threegeek.com.