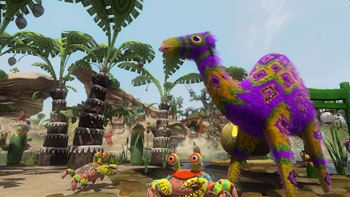 Fans of Viva Pinata have spent many fruitless hours trying to convince non-believers that there was a genuine game lurking beneath that adorable paper animal exterior. Critics loved it, but 360 owners stayed away in droves, writing off Viva as just another kids' game connected to a stupid cartoon. As it turns out, they were smart to hold off, because Viva Pinata: Trouble in Paradise is not just a bigger and better sequel, it's the game Viva Pinata should have been all along.

The first Pinata was a deep and entertaining experience, almost in spite of itself. A seemingly unending tutorial phase and frequently frustrating controls couldn't diminish the joy of collecting the colorful and cheerful pinatas that inhabited the game's sandbox world. Raising paper pets didn't present the same kind of challengs as beating Halo on Legendary, but taming the unruly pinatas and discovering the game's secrets was just as satisfying and challenging.

The main objective of Trouble - to cultivate a garden that attracts the charming and colorful piñatas - carries over from the first game, but you're now also tasked with restoring Pinata Central's database after Professor Pester accidentally wipes it clean. Getting started in Trouble is far easier than it was in Viva; rather than starting with an abandoned lot filled with cracked earth and debris, you begin in a grass-covered garden complete with flowers, fencing, and one piñata already in residence. You're even given some start-up cash to help you purchase supplies. Veterans will be pleased at how quickly they can have a viable garden up and running, while newcomers won't feel bogged down by endless tutorial windows and advice bubbles.

The challenge of Trouble lies in meeting each pinata's particular requirements for visiting your garden, becoming a resident, and breeding - genteely referred to as "romancing." Lower level animals might need nothing more than the presence of a certain flower or tree to come calling, but the requirements for more valuable piñatas are far more extensive and complicated. Satisfying all 100 species requires dedication and patience, but the game's sandbox nature grants you the freedom to collect them all or just specialize in a specific few as you see fit. You're not stuck to just one garden either, you can - and probably should - keep several running at once. Maintaining multiple gardens isn't just a fun way to satisfy your creativity, it's really the only practical way to keep attracting newer, more exotic piñatas.

If you need a break from perfecting your piñata paradise, you can always restore a few records from Piñata Central's database. Shipping a piñata off to a party adds its information to the computer, though you'll have to fill up its Candiosity (happiness) meter first, usually by feeding it its favorite foods or teaching it tricks. You can just send off any old happy piñata, but filling requests for specific animals will help you clear challenges and eventually unlock garden items or costume pieces for your pets. If you're not particularly obsessed with collecting every last item in the game and would rather just putter around the garden, you can simply ignore Pinata Central's requests - none of the challenge rewards are vital to making progress in Trouble.