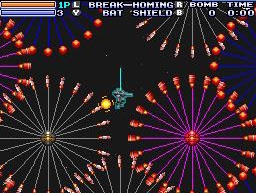 After Ikaruga, it looked as though Treasure had resigned itself to being the master of that antiquated genre, the shmup. It's a tricky situation, when the best that might be said about your chosen genre's fans is that they are the sort destined for fame as the documentary subjects in The King of Kong's inevitable sequel. Where do you go from there? The ensuing games from that studio were expressive of that conflict. A serious case of writer's block, these games were fine pieces of craftsmanship but sadly conservative, and ran that fine line of irrelevance that's become an endemic condition amongst Japanese developers. Fortunately, Treasure snapped out of its developmental ennui and released Bangai-O Spirits.

Although not a wholesale evolution of the shooter genre, Bangai-O Spirits is, at the very least, a significant deviation. Always veering towards abstraction, the shmup has recently made a total departure from any meaningful iconography, with Geometry Wars and Everyday Shooter having led the charge. Bangai-O Spirits is no different from those examples in that the game is populated by an enormous amount of objects with no apparent relation to one another. Soccer balls sit alongside giant robots, ants, ninjas, pineapples and all other types of ephemera giving the player the feeling that the game takes place in a kind of 16-bit era sprite junkyard. This feels appropriate because in 1994 this game would've been a genuine technical marvel, even with its massive slowdown issues, as hundreds of missiles and their vapor trails crowd the screen. Being able to recognize and appreciate this bravado is sure to bring a wistful look to any gamer familiar with the era. Make no mistake though, despite a very modern level of visual abstraction, sprite fetishes are a loaded aesthetic choice. It's an obvious play for nostalgia, and such sentiments can trivialize an otherwise innovative game, pigeonholing it as the domain of, well, Treasure fans.

Despite Treasure's excessive interest in the past, Bangai-O Spirits succeeds magnificently as a deconstruction of the shooter genre and shares many sensibilities with Wario Ware, itself a kind of post-modern take on the traditional notion of a videogame. Like that game, Bangai-O Spirits isn't a linear start to finish experience; instead it's a series of 160 levels, any of which are available to play through at the player's leisure. The levels themselves are remarkably simple in that all of them take place inside a finite box or rectangle. Yet within this limited framework there is enormous variety, with some levels being all out bullet hells, others sliding block puzzles and the best, a combination of both shooter intensity and querulous puzzle game moments. What's fascinating is that every one of the 160 pre-made levels can be finished in a myriad of ways - a striking departure from the highly structured design typical of the genre. The controls and weapons, unmistakably Treasure-esque in their initial obstinacy and eventual empowerment, make this possible. From missiles that bounce off walls and blossom like Chinese firecrackers, to baseball bats capable of whacking both enemies and projectiles across the screen, the player is presented with a plethora of gameplay-altering weapons, all available at the start of any given level.