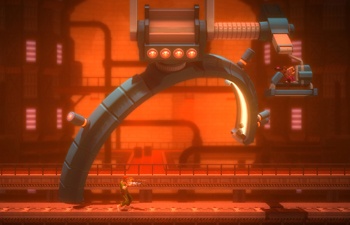 In Bionic Commando you could run and shoot, but you could also swing. Yes, swing. You could climb ledges with your bionic arm and use it - gasp - to manipulate the environment. Objects were no longer merely set dressing, they were there to be used. Grapple onto a lamppost to swing across the chasm filled with deadly spikes.

No other game had that. Pitfall, maybe, but there's really no comparison. Pitfall Harry swung like he was made of lead. In Bionic Commando, you swung like you were born to do it, like you were Tarzan with a gun. Maybe the limitations of the hardware made it all the more exciting that someone figured a way to create movement and physics that felt like really swinging. Maybe, in all truth, it wasn't very realistic at all, but back then all we had were shadows on the wall, and when they turned on the lights, we could suddenly swing. It didn't have to be perfect - it was better than anything we'd seen at the time, and that made it awesome.

As part of the run-up to the release of a next-gen Bionic Commando installment for PC, Xbox 360 and PS3, Swedish developer Grin and Capcom have released Bionic Commando: Rearmed, a lavish, lovingly-crafted re-make of the NES title. The result, however, is less like running into that long-lost love on the subway, than running into her sister. The one who's prettier, but somehow, not as sexy.

Like Gus Van Sant's famous 1998 remake of Hitchcock's classic film Psycho, Rearmed reconstructs the original game level by level, scene by scene, shot by shot. And, just like Van Sant's Psycho, it completely fails to recapture the spirit of the original.

Rearmed features the same ridiculous plot about a military madman bent on taking over the world, and a lone badass with a bionic arm who seems to be the only person capable of thwarting his evil schemes. And, just like with all Capcom games, there are even big boss badguys that just happen to have been constructed with a single, fatal flaw our hero is uniquely qualified to exploit. The game is, therefore, the quintessence of the original, but with updated art, sound, physics and all the other trappings of modern videogame ephemera. It should be perfection on a stick, but somehow the mojo is lost, painted over after one too many coats of veneer.

Perhaps the joy of running, shooting and swinging belonged to another time. It's telling, for example, that a complete recreation of a AAA title from the 80s is little more than a budget download today. Times have changed, and even a glossy reproduction of a two-decades old game isn't exciting enough to be more than a momentary distraction.

I played through most of Rearmed on a Saturday and Sunday afternoon and then rapidly stopped thinking about it. Was it fun for the eight hours or so I played it? Yes. The graphics are as exciting as any on a 2D, scrolling platformer have any right to be. I understand now the claims that this game may reinvent the genre. Do I think that will happen? No, of course not, but if you're jonesing for some well-made, beautiful-looking retro gaming action, this is your huckleberry.