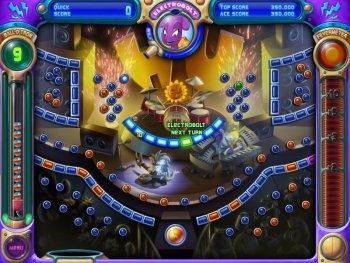 Walk into most casinos, and you'll notice a bizarre dichotomy. On one side, you have the carnival atmosphere - rooms full of flashing, multicolored lights, a cacophony of jubilant noise. On the other, you have the patrons themselves - often elderly, of limited means, caught in the endless time loop of pulling levers and pressing buttons in their pursuit a fleeting dream. The sights and sounds are just a distraction from the underlying truth: The house always wins. Pretty lights don't pay for themselves.

But it doesn't have to be that way. Why employ those psychological tricks just to make people feel less miserable when you can make them feel genuinely good instead? Why not serve up all those blissful stimuli without reinforcing potentially destructive behavior?

With Peggle, PopCap Games has done exactly that. Peggle is like a slot machine that dispenses bubble wrap. Compulsive? Extremely. Annoying to the people around you? Maybe a little. Therapeutic? Somehow, yes.

A cross between pinball, pachinko and any number of $.25 games of chance, Peggle lets you pick from a cast of 10 colorful characters with the same goal: clear each level of orange pegs by hitting them with bouncing steel balls before you run out of turns. There's a healthy dose of luck involved in each shot - you can typically control where the ball will go after one bounce, but after that it's pretty much out of your hands. It's both the game's fundamental flaw and part of its appeal.

Peggle Nights is the follow-up to last year's highest grossing ball-bouncing game. Nights is less a sequel than an expansion, although you certainly don't need its predecessor to appreciate it. None of the game mechanics have been changed in any perceptible way, from the scoring system to the special abilities, save for the addition of a new character, a squid named Marina with an electrobolt that knocks out a chain of pegs between your first impact and the roving "free ball" bucket. Mostly, it's just 60 more levels of Peggle - and that's all it really needs to be.

What elevates Peggle (and Nights) above the sea of mediocre casual games is its attitude. Quite simply, Peggle is likely one of the most uplifting, encouraging games you'll ever play. There are no real "opponents" on the board except for the occasional obstacle blocking your ideal shot. Instead, Peggle takes every opportunity it can find to remind you of how awesome you are. Make a bank shot off the wall? Great job! You deserve an extra 10,000 points and a hearty pat on the back. Benefit from a lucky bounce? Whoa, that was cool! Here, have another 5,000 points for good measure. Whiff completely? It probably wasn't your fault anyway - we'll flip a coin and maybe you'll get a second chance.

In short, Peggle is less a game than a delivery mechanism for positive reinforcement. There are 60 "challenges" to complete, but when so much of your success depends on a lucky bounce, you're not really playing for the "challenge," are you? Admit it: You're playing for the rainbows, the fireworks, the ribbons and trophies, the feeling that you are important and good and everything is right in the world.

You were never there for me, Dad.

Bottom line: It's more Peggle. If you liked the first game, you'll like the sequel.

Recommendation: If you need a quick shot of happiness, it's safer than anonymous sex or recreational drugs.

Jordan Deam's parents are really wonderful, supportive people, although they're no substitute for a skateboarding gopher.