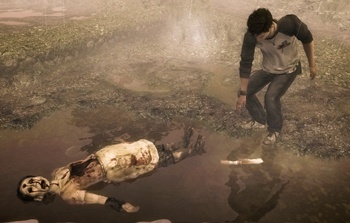 A long time ago in the year two, double-o three, Sony released Siren for the PlayStation 2, a Japanese horror title in the vein of Ring and The Grudge. Aside from its moody atmosphere, it didn't do much to stand out from the rest of the survival horror pack as it pit a cast of relatively average protagonists against a horde of zombies, or in this case, "shibito." Critics responded by garnishing Siren with appropriately average reviews and for the most part, the game faded into obscurity.

But what if Sony could take it all back and start all over again on the PlayStation 3? Perhaps the original Siren, produced by Silent Hill director Keiichiro Toyama, didn't quite live up to the original vision? Can one really take a mediocre horror game and mold it into a sure-fire hit? Submitted for the approval of the Escapist society, I call this tale, Siren: Blood Curse.

Despite being a remake of the original PlayStation 2 game, things are immediately different upon upping the ante for the next generation, and I don't just mean the visuals. I mean just attempting to acquire Blood Curse is different. While it's available online throughout the world, Japan and eventually, Europe, can pick up the game in a convenient Blu-Ray package. For the rest of us here in the States, we get to spend about 6 to 8 hours downloading the game's 12 episodic chunks from the PlayStation Network, individually, then spend another hour installing each episode, individually. So the next time you read a news site or message board and folks are complaining about being forced to spend 10 minutes installing the latest game, never forget: Siren.

Once you've grown old and sent away your first born to college, jumping into Blood Curse will seem almost immediately familiar to those who played the original on the PlayStation 2, which is all well and good (it is a remake, after all), only for all the wrong reasons. The story is largely the same - a melodramatic cast of characters find themselves trapped in a rural Japanese village- but so are the weak visuals and clunky controls. The fact of the matter is that Blood Curse simply doesn't look the part of a PlayStation 3 game, and what little there is to write home about is obscured by the infinite darkness and grain filters that are deployed at all times, flashlight or not. Running your character about the environments would be passable, but the camera absolutely refuses to play along, bouncing about erratically and simply never feeling part of the action. Again, if this all sounds familiar to you, it's probably because these are mostly the same complaints you could throw against the original five year old Siren.

Blood Curse isn't just content with being a survival horror game; it's also a stealth survival horror game, meaning that you're going to be required to pull off some fairly precise maneuvers, particularly in later episodes. I say required because the zomb- err, I mean shibito, can't be killed, so really, it's become Solid Snake or die. To assist you in your stumbling through the dark is the "sightjacking" feature, which is useful, but also headache inducing. By sightjacking, players can look through the eyes of the shibito and gain knowledge of their lines of sight and areas ahead. Using this feature is easy enough and the split-screen effect in which you see it seems like a good deal, but sneaking about with this drunkard of a camera while trying to pay attention to what's going on with your zombie friend is almost more trouble than its worth. Still, if you plan on not restarting your game every five minutes, you'd better learn how to tolerate it and fast.