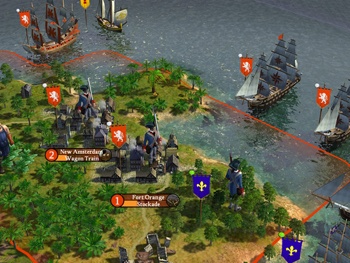 Colonization, Sid Meier's classic 1994 game about exploration, development, and revolution in the New World, served as the perfect follow-up to Civilization and showed what that gameplay concept could do when focused on a specific part of the world and era of history. It also managed to get itself so thoroughly bogged down in late-game micromanagement that many players never got to reach the point of declaring independence, instead giving up in frustration after dealing with an empire that had grown too big for the tools available to keep it under control. The underlying feeling in the end was that the game was a very good premise executed not quite perfectly and was really for die-hard fans of turn-based 4X games only.

That's not to say that a total conversion mod is a bad thing. When the conversion manages to nail down the zeitgeist of the game it's seeking to remake (sorry, "re-imagine", since someone at 2K loves to throw that word into press releases), that is an accomplishment worthy of praise. All the core elements are there: You start with a ship, a settler, a soldier, and the virgin territory of the New World in front of you. From there you build more cities, train more troops, stoke the fires of rebellion, and ultimately win your independence from the mother country in a glorious Revolutionary War. As the victory movie plays, you thump your chest like an ape while your wife considers whether she should put the psychiatrist on speed dial, though your post-victory experience may (and should) vary.

The four nations from the original return with their bonuses from the original game retained and a new twist added. Instead of simply playing as a nameless viceroy of England, Holland, France, or Spain, you are now given two choices of leader for each nation, each with their national bonus (England gets more immigration from religious unrest, for example) and a leader-specific bonus (George Washington allows you to more easily train soldiers, Simon Bolivar makes your revolutionaries fight more effectively - the bonuses are tied to the leader's historical attributes). This allows the player to choose a style that fits the way he plays and therefore carries over one of Civ4's greatest strengths. Although you will have to win a war in this one since there is only one victory condition, how you get there is entirely up to you.