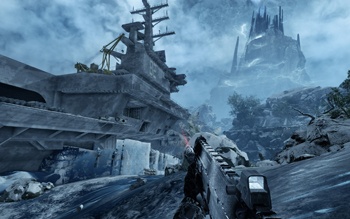 In the aftermath of Crysis's launch, many players realized that its allegedly hardware-melting system requirements weren't as devastating as initially advertised. Many of those who took the plunge found developer Crytek's engine quite scalable, delivering great visuals while retaining a reasonable level of performance. As a result, a great first-person shooter ended up somewhat underappreciated due to all its obnoxious boasting.Ten months later, Crysis Warhead has managed to deliver a more refined game experience, though some of Crysis' flaws remain to haunt veterans.

In Warhead, the player steps into the rather flattering nano-suit of Raptor Team's Sergeant "Psycho" Sykes, a comrade of the previous game's protagonist, "Nomad." Starting at roughly the halfway point of the original and running parallel to its story, Psycho spends most of his time on the other side of the island, helping U.S. Forces battle the North Korean People's Army (KPA), eventually pursuing the dastardly Colonel Lee as he attempts to capture a strange piece of alien hardware. And as befitting of an expansion pack with further sequels on the docket, Warhead ends with more questions than answers, which will undoubtedly be addressed in coming portions of Crytek's planned trilogy.

Given that Warhead's engine optimizations are a key selling point, it's important to regard technical performance. Running the game on my personal rig, which handled the original on "High" settings at a playable frame rate of 20-25fps I didn't detect any particular improvements in Warhead's performance over Crysis. Perhaps this is due to my machine not meeting the specs for which Warhead was optimized, but in the end I played the game on "Gamer" settings without much trouble besides some draw-in at the level beginnings and large drops during the chase sequences..

Warhead's single-player campaign is superior in almost every way to Crysis'. Pyscho's Jason Statham-esque performance drips with personality, both in cutscenes and radio interaction with friend and Raptor Team washout Sean O'Neill. During the campaign he also gets to hook up with a team of fellow nano-suited soldiers, see (and participate in) frequent engagements between KPA troops and alien forces, and, most importantly, not have to bounce around in a boring alien spaceship. All in all, Psycho had a lot more fun on the island than poor Nomad.

Each encounter is loaded with enemies and opportunities to vary tactics and approaches. Warhead's prime gimmick is, of course, the nano-suit, a special uniform that grants its user a variety of superpowers, including rapid Speed Mode dashing, Strength Mode-assisted high jumps, and an infinitely useful invisibility cloak. The superpowers really do give a feeling of omnipotence and great tactical freedom, and thankfully the game's level design allows for ample opportunity to explore that. You can use Strength mode to clamber to a high sniping spot atop a normally inaccessible roof, use Speed mode to dodge an alien's beam attack, or switch on your Cloak to sneak up behind an unsuspecting guard, grab him by the neck, and fling him off a cliff. That last bit never gets old.