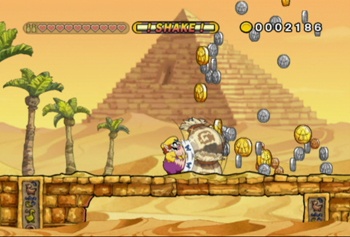 Shaking it is nothing new for Wario where his, uh, warez are concerned, but the motion control does revamp his 2-D side scrolling adventure series. The first question that comes to mind is whether that new element will have us shaking our heads in addition to our Wiimotes. While the time to waggle discontent varies from gamer to gamer, Wario Land: Shake It! manages to balance it out.

The cute and colorful Merfles have been captured by the Shake King and his pack of crabapple-like Bandineros, but one manages to escape. Unfortunately, he runs into Wario, who isn't exactly the compassionate, heroic type. As it stands, Wario can only be compelled to act with the mention of a bottomless bag of gold coins; never mind that it's not really for him-he's perfectly willing to step in as the secondary villain in the story. Not that this is surprising for fans of the series, who will also recognize his nemesis-turned-pseudo-accomplice, Captain Syrup.

After the tutorial level aboard Captain Syrup's ship, The Sweet Stuff, it is perhaps a bit unnerving to find that you have to buy each world map. Unless you are the kind of whiz kid who can nab every coin on your first play-through (made difficult by the fact that shaking sacks of coins sends them flying all over the screen, and of course, that many are hidden), Wario Land entails some light grinding disguised as return visits to levels where you haven't yet found all three treasures (Full-body goggles, anyone? Piranha dentures?) or received every mission star (like Xbox achievements).

The motion-controlled moves are very responsive and don't require any grandiose theatrics. Instead of bringing the whole Remote down to pound the ground, for instance, you can just let go with one hand and jiggle remaining wrist. In fact, this maneuver works for shaking coins and enemies, flipping on bars in a feat of gymnastics you wouldn't really believe possible from such a barrel of a guy, and any other shake-type move. Some might be annoyed by the constant need to shake for coins, but for the most part I felt like there were enough other activities in between.

For example, the throwing move is awesomely reminiscent of hurling eggs in Yoshi's Island. In fact, screw Wario, where's Yoshi's Island 3 for Wii? I want to tilt to aim eggs, not dizzy Bandineros or bouncy balls.

Occasionally there are vehicles that require motion steering, which take a little more getting used to. For instance, I expected the missile-toting submarine level to be a one-off, and was a little bummed when I finally got the hang of the controls, only to reach the end of the level. It was rewarding to find that bit of learning curve hike useful for a couple other sub stages, even if the auto-scrolling environment can be anxiety-inducing.

The one element of this game that had me really worried was that after you find the Merfle locked up at the end of each stage, whether jungle, ice, or freaky carnival (etc.), you have to backtrack to the entrance of the level. That sounded long, tedious, and not worth anyone's precious gaming time. Luckily, the backtracking has been made into a twitchy sort of puzzle, where finding and managing to continue along the fastest alternate route to earn the mission star for speed makes you feel like a person who possesses both smarts and brilliant hand-eye coordination. Failing, well, it's not quite as horrible as I had anticipated, since it's not always straight-up retracing your steps.

At the end of each of the five worlds lives a boss whose seal you need to reach the eventual showdown with the Shake King. They were all pretty satisfying exercises in pattern recognition and sometimes just plain old, "How do I hit this guy?" Thankfully, once you know what to do and become reasonably adept at doing it, you're not forced to continue on in that vein for twenty minutes-the battles are pretty short as well as multi-staged, so your tactic changes every couple of hits. For example, Chortlebot is a mechanical floating clown head (I know--the sheer terror!) with a spiky yo-yo for a nose, which later splits in half and begins rotating, and then there are fire and laser disks... I'm not saying you won't swear at this game-it will happen-but the perseverance required is not extreme; the ratio of fun to frustration is reasonable.

The Bottom Line: Short and sweet, with room for obsessive collecting and secret map hunting once you win, Wario Land: Shake It!, also looks great. High quality 2-D animation is better than crummy 3-D any day. The soundtrack is a quirky mix of almost easy listening-esque tunes and at least one track my roommate suggested would better suit rocket ships.

The most important issue for some will be the the motion control. There is no reason that you couldn't map the shake moves to buttons instead, and does shaking really make a game more fun? I never got sore (or bored, with the exception of coin grinding) playing Wario.

Recommendation: Rent it. You can do the basic play-through in a weekend and see if it grabs you enough to warrant returning to fulfill any completionist aspirations.

Emily Balistrieri is not really scared of clowns...unless there are fire and laser disks.