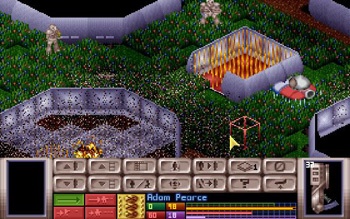 "... across the gulf of space, minds immeasurably superior to ours regarded this earth with envious eyes; and slowly, and surely, they drew their plans against us."

Back in 1984, a new game rocked the home-computer world. It was a simple tactical game called Rebelstar Raiders where bold Space Marines (then a new phenomenon) battled against enemies. The progenitor of this series, Julian Gollop, progressed it through various platforms, giving us Laser Squad.

A young William Gates was then setting up Microsoft, and, as rumors of Windows were first emerging, Gollop took the next big step: alongside the invasion of Windows 3.1, there came X-Com.

15 years later, Steam has bought the rights to these early treasures, and here I don my Spacesuit to check them out.

X-COM : UFO Defense
In the new year of 1999, the Governments of the World ask you, as head of X-Com, to research the increased UFO sightings of the last year. Finding a starting location, you place your base down to defend the World.

Most of X-Com plays with an isometric map. Each character has action points that they spend on moving, shooting and exploring; but it soon becomes apparent that you're not alone. The first shots from an alien will probably fell one of your little Lego-man figures with an agonizing scream, but then your team open up and the green splat appears in its chest. By caution or extreme violence, you'll find them and then it's back to base.

The gameplay runs between base work - researching, building, manufacturing - and these tactical missions. The missions may be slow but each kill these guys get makes them harder, and until you get the decent armor, one shot kills. This makes it tough. REAL tough. This is back when games were made to last and it shows.

Another lovely thing is that the marines have changeable names. Get annoyed with someone on the forums? Recruit a new soldier, name him and send him to check out the Alien Spaceship with no armor and high explosives.

It's not a dip-in game, but it's wonderful for those of us that like to plan our moves ahead. Think of it as chess with guns. And aliens.

Towards the end, you'll be flying spaceships with photon cannons but you'll still be doing similar missions (this time with psychic attacks and floating aliens) before reaching the alien base.

But no more spoilers because that would ruin the fun.