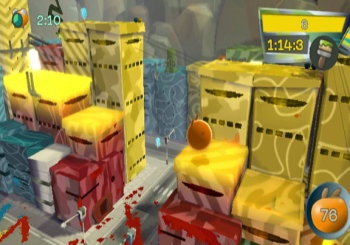 It's a sad reality of growing up: Sometimes circumstances beyond our control can drain all the enthusiasm, color, and meaning out of our lives. Anyone who's ever endured hour-long commutes and the endless tedium of working in a typical cubicle farm knows the feeling - myself included. Being trapped for too long in a melancholy haze of gray tends to inspire a desire for change.

So it is with the citizens of Chroma City, the once-colorful burg that provides the setting for Blue Tongue Entertainment's de Blob. After the INKT Corporation moves into town and converts the radiant metropolis into a massive, cheerless factory, the town's inhabitants shuffle from one featureless building to the next with the weary resignation of a Las Vegas realtor. Of course, all hope is not lost. A gang of rebels led by the titular Blob mounts a guerilla-style resistance to bring color back to the land.

Blob is an unusual fellow. Essentially made out of a ball of goo, he has the power to absorb any color he touches and then bound around the city painting everything he touches. Much of the gameplay hinges on this uncomplicated but extremely fun mechanic. The primary objective focuses on coloring in the city's structures and inhabitants. Thrashing the regenerating paintbots found in copious quantity throughout each level provides a steady supply of paint for your efforts. Each holds one of three primary colors (red, blue, and yellow), which you can mix in various combinations to create other colors. This is aesthetically interesting, but it's also required to solve some puzzles calling for certain buildings to receive a specific color coat.

Every structure you paint increases a meter that eventually unlocks gates to new areas in the city. Though there's a generous time limit to help keep you focused, you can extend it by completing secondary objectives or picking up bonuses from the Raydians freed when you color an entire cluster of buildings. As a result, the pacing remains slow and steady. Painting the hell out of everything is an absorbing activity in itself. However, there's more to do along the way. Blob's teammates provide a series of mini-challenges that fall into several predictable categories, including waypoint races, battles and capturing key building. These brief jaunts yield cool rewards, but it doesn't take long for them to devolve into repetition. Thankfully, they're not all mandatory.

Taking back the city piece by piece is a slow and entertaining process. Traps, turrets, tanks, pools of black ink and other baddies abound alonside the many obstacles littering the 10 main stages. The mild to moderate difficulty keeps the game accessible for most players. Pummeling inky ruffians and sticking it to the Man takes a back seat to the blissful activity of painting the town all manner of vile color combinations. Seeing the impact you have on the city as you embark on your creative, paint-fueled rampage is the real joy to be had.

The Wii seems a good home for de Blob, but the system's controls aren't utilized to their fullest potential. And while the environments are bright and creatively designed, the graphics aren't as revolutionary as the game's concept. Wonky camera angles occasionally hinder your progress. Additionally, unnecessary waggle gestures overcomplicate an otherwise simple control scheme - the jump and attack controls could have been easily been mapped to buttons without negatively impacting the game. It's a wonderful title, yet nothing really stands out to justify the platform exclusivity.

Content-wise, de Blob isn't lacking. Each of the main levels is quite lengthy, and completing one unlocks several secret missions to revisit for fun when the main party is over. Even when the story runs its course, there's plenty of reason to go back and re-play areas to wrap up all the mini-missions, save any Raydians you missed and go for 100-percent painting completion. The competitive painting-oriented multiplayer activities are also worth your attention.

de Blob fulfills a very primal human need to see color and joy sprout up from dull lifelessness. Like a giant coloring book, the walls of Chroma City are a blank canvas awaiting an artistic touch.

Bottom Line: A perfect cure for the doldrums, de Blob has the power to brightens moods with gleefully messy blasts of color. If the world was a coloring book, it would be a happier place.

Recommendation: Buy it. It's an awesome game with a concept that's too good to pass up.

Nathan Meunier feels slightly bad for the Raydians who got stuck living in pee-yellow buildings.