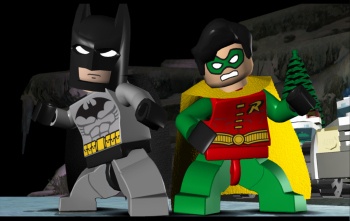 To be honest, I'm having serious difficulty determining why I love playing LEGO Batman: The Videogame so much. Maybe it's just my unconquerable Batman addiction, but that's far too obvious. The answer is out there somewhere.

Everybody knows the story: Young LEGO Bruce Wayne, his parents gunned down before his eyes, spends years thereafter crisscrossing the LEGO globe, amassing the knowledge and skills he would need to one day return to LEGO Gotham City and fight for LEGO justice as ... LEGO Batman!

The latest in the growing line of LEGO games to exploit universally recognizable franchises, LEGO Batman is the absolute pinnacle of product-placement entertainment - that odd phenomenon that's been following me ever since I started watching He-Man and G.I. Joe cartoons as a child. Just leave the start screen up and you'll see what I mean. Rather than the usual demo or introductory cutscene, you're be treated to a commercial for the game that is currently in your system. Now that's commitment.

For the unfamiliar, the LEGO [Universally Recognizable Franchise Here] series is extraordinarily simple in execution - highly reminiscent of the 2-D beat'em-up games of yore. The missions all boil down to the two basic tenets of that genre: Go right and smash everything. Uncomplicated, to be sure, but who said fun should require a stack of sourcebooks?

You fight, bust or activate every possible dude and/or object you come across to amass studs (the series' ubiquitous currency) and other various knickknacks you use to purchase or otherwise unlock all the characters, vehicles, costume upgrades, gadgets and whatnot that you'll need when you go back to replay the same levels over again in search of all those McGuffins you missed the first time around. Your all-consuming lust for bricks is split down the middle between 15 hero missions, wherein you fill the roles of LEGO Batman and Robin, and 15 villain missions, wherein you cycle through every recognizable Bat-villain ever.

The plot is a distilled shot of your typical Batman story: All the major criminals of (LEGO) Gotham City bust out of Arkham Asylum to wreak E-rated havoc upon the highly destructible citizenry. Pantomime cut scenes with plenty of the slapstick charm for which the series has become known carry the story. Though not based on individual Batman properties, there are definite echoes and homages to the Burton/Schumacher Bat-films in some villain pairings and settings: Riddler with Two-Face, The Penguin with Catwoman and the face off with the Joker in a clock tower finale. The landmark Batman: The Animated Series also gets a nod in a LEGO-ized version of it's iconic opening sequence, and Danny Elfman's instantly recognizable 1989 Batman score makes its triumphant return as nearly every piece of music in the game, tying everything together one beautiful, nerd-gasmic bow.