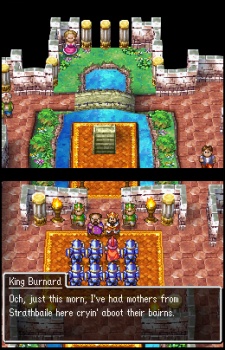 Column A: Hundreds of jittery devotees arranged in a snaking line. Column B: Two slightly overweight guys in their mid-20s waiting outside a nearly abandoned GameStop. A: Eye-catching posters, mirthful stuffed animals and pre-planned spin-offs. B: A single internet banner ad sacrificed to sate your popup blocker's Kobayashi-esque hunger. The prompt? Dragon Quest in Japan vs. Dragon Quest in America.

The Dragon Quest series' shameful existence outside of Japan begs the question: Why does Square Enix even bother? Sure, the games are great - and I fling my (beard-tastically manly) pom-poms into the air every time the Japanese publisher makes the effort - but every country other than the Land of the Rising Sun is so resistant to Dragon Quest fever that I'm pretty sure it's part of our post-natal vaccination package. And the sad but hardly surprising truth is Dragon Quest IV's DS re-release hasn't changed the virus one bit. In fact, Square Enix's latest futile (but hugely appreciated) effort only serves to put the many aspects of Dragon Quest that are so laughably unpalatable to non-Japanese audiences under the microscope.

Within minutes of gawking at DQIV's uncharacteristically lavish start screen, you'll (randomly) encounter the game's first "flaw": the battle system. For players whose RPG sensibilities were weaned on Final Fantasy VII's classy merlot, the DQ series' solid but flavorless swig of Dasani is probably pretty off-putting. For one, your characters - attractively designed by Dragonball-scribe Akira Toriyama - don't even appear on screen. Monsters throw themselves head-long into boxes filled with bars and numbers, or so it appears. Set against sparse backgrounds, battles proceed in a typical "Oh, I say, good fellow, it does appear to be your turn" fashion, all while a text box at the bottom of the screen narrates your game of tag-with-swords as though it were a tale for the ages.

During the game's early, less difficult half, I mashed the A button in what felt like a never-ending battle against boredom. Yeah, I'm pretty sure there were monsters, but oh hey, The Colbert Report is on! After I snoozed my way past the game's first couple of chapters, however, things began to click.

See, one of the most enjoyable aspects of DQIV is, surprisingly enough (for a DQ title, anyway), its story. The seemingly bare-bones narrative is the industrial-strength adhesive that holds the entire game together. As per usual, DQIV's plot places you in the shoes of An Intrepid Group of Heroes On A Journey To Save The World™ - but not at all once. The game is comprised of chapters that each place the camera behind a different character. Thus, in a sense, it's an actual roleplaying game with you, the player, occupying different roles as the game progresses.

Beginning anew every few hours might seem tedious. After all, RPGs rely on the player's sense of progression, and returning to good ol' square-one is about as far from rewarding as one could get. But instead of devolving into a groan-inducing return to humble beginnings, DQIV's chapter system is an excellent example of how to pace a game. Until the game's final, party-uniting chapter, hour-long grinding sessions are nearly non-existent. Because you "start-over" so frequently, level-ups are fast and furious. Translated for MMOG players: It's like starting an alt.