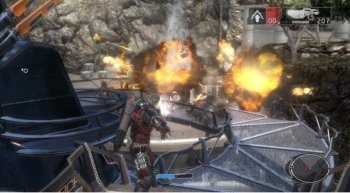 By now, the premise of Fracture will be familiar to most gamers. You're thrown into a futuristic battle between opposing cybernetic forces in which each side can use terrain-deforming weapons. You are the only one that can keep any type of stability in a war that threatens to destroy the world as we know it. You get your orders, masses of "bad guys" jump down your throat, and cool power weapons litter the path to your objective. Oh, and there just happens to be a story crammed in there somewhere.

Fracture's most noteworthy trait is it's much talked-about terrain deformation system. With the push of a bumper, your character can raise the ground into a small mound or turn it into a crater. You can use this mechanic to create some cover for yourself in a firefight, make a ramp up to higher ground to leap over a wall or dig yourself into a corner and cry. There are four different types of grenades you find throughout the game with nearly identical abilities plus a little splash damage. On paper, these deformation techniques sound like a great idea. In practice, they're a bit of a pain in the ass.

In every level, you're forced to use these deformations techniques to solve rudimentary puzzles. For instance, I had to "dig" into the dirt to find a tunnel that would lead me to the next room, in which I had to immediately create a mound in front of me to block incoming fire. The first couple times were actually very satisfying, and I had to put down my controller to give a golf clap for LucasArts for coming up with some original fun. Maybe this game would be different after all!

Unfortunately, it was downhill from there. Fracture forcues you to use these techniques over and over again to attain access to different areas. It's not a big deal until the game throws common sense and fun out the window. The same grenades that can topple buildings prove incapable of penetrating the most flimsy steel grates. When a game's biggest challenge lies in figuring out where common sense applies, you have a problem.

That brings me to Fracture's weapons. The game's more creative firearms were some of the coolest I have seen in any game - I just wish they were worth using.. I ended up sticking with the standard machine gun and ranged rifle practically the whole game. It's a common problem with first-person shooters - unconventional weapons are only useful when the story allows for it. In a couple places, you're able to bring down full sections of mountainside to wipe out a barrage of guys shooting at you, but this is only available a handful of times throughout the game. (And by the way, the rocket that brought down this mountainside was also unable to destroy the aforementioned grate.)

In the end, the campaign mode was just "eh." I felt like I had played this game many times before, and there were so few enemy character models, I actually started giving them all different names just to feel as though I had some variety in whomever I was shooting.