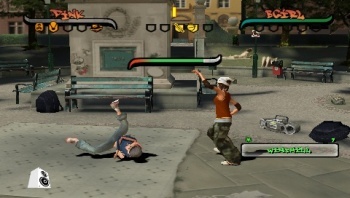 Growing up in the '80s, it was damn near impossible to escape exposure to breakdancing - especially if you happened to have a fondness for old-school hip hop. Watching people execute crazy headstands, spin around on their backs and undulate like writhing snakes with insane precision was always awe inspiring. If you've ever fantasized about what it's like being a breaker but never quite had the physical skill to pull it off, B-Boy on the PSP offers a chance to live vicariously through button mashing.

Judging from the sterile functionality of the Lab - the sparsely outfitted loft that serves as your in-game crash pad, dance studio and home base - the basic essentials required for life as a B-boy or B-girl are meager at best. It's all about skill and reputation; you'll have plenty of time to build both as you work you way up the ranks of the B-boy elite. In the Lab, you can check out and hand-pick your moves, practice on the dance floor and change your wardrobe and appearance. Most importantly, a small laptop resting on a makeshift table made of plywood and sawhorses lets you enter competitions and set up matches against competing breakers. Once you accept a challenge, it's on to the streets for the real action.

B-Boy's breakdancing throwdowns happen in all manner of urban environments. Surrounded by a crowd of enthusiastic onlookers, the breakers take turns churning out their best moves in an attempt to upstage one another. In each face off, players have 45 seconds to fire off trick combos to earn medals in different categories including foundation, flow, creativity, rhythm and blow-up moves. Outshining your opponent and stealing their badges with flashy moves will net you the win. Basic matches are short and sweet - they take about as long to load as they do to play.

Rhythm is integral to dance, so it makes sense B-Boy contains minor rhythmic button-tapping elements, but it's not a rhythm game in the traditional sense. Executing moves feels a lot more akin to playing Tony Hawk than PaRappa the Rapper. Tapping each of the four PSP face buttons triggers a base move (toprock, freeze, power and footwork) that serves as a foundation on which to build a bevy of different tricks. From there, you can add other moves and chain them together into combos. The rhythm component comes in almost as an afterthought; you can tap out the beat with the shoulder buttons to increase your score, and continue holding a particular move by following a series of small blocks that travel around a halo surrounding your character. It's an awkward combination that works once you finally get the hang of it.