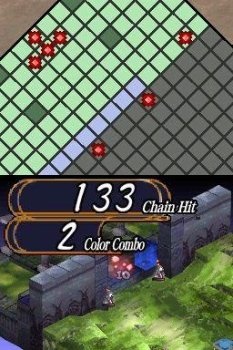 Disgaea on the DS is a remake of the first game in the series, which originally appeared on the PlayStation 2 back in 2002. It's the first foray into the handheld sphere by Nippon Ichi Software and gives DS owners a chance to play an strategy-RPG that isn't Final Fantasy Tactics or Fire Emblem. Fans of the series can stop reading here and go buy the game; it's the same Disgaea you know and love, only portable. For those new to the series or even the genre, this is your introduction to one of the most maddeningly addictive franchises of the last decade.

The game opens in boilerplate JRPG style as the young hero wakes up and is summarily tasked with saving the world. So begins a long and illustrious trip through one of the most genre-savvy, self-aware games to come out in quite a while. No RPG or cultural cliché is spared the wrath of the writers' cutting wit and willingness to lampoon any trope that wanders into their field of view. From the alt-story "next episode" teasers in anime to the game's very fungible fourth wall, the dialogue and script are tremendously sharp and uproariously funny.

Disgaea takes the traditional battle of good and evil and turns it on its ear. Aside from the fact that Laharl, the lead character, is the son of what essentially amounts to the King of Hell, the combination of fallen angels, angels of the regular kind and downright diabolical "good guys," added to the fact that the Netherworld isn't even as hellish as some of the game's later locales, means you can pretty much toss out the window any preconceived notions you may have about standard JRPG morality. While an SRPG can get away with little more than a good battle system and a modest backstory (Final Fantasy Tactics Advance, I'm looking at you), the extra effort put forth by the writers and the localization team shows through here and puts the roleplaying into "strategy roleplaying game."

The graphics are isometric pseudo 3-D, with a polygonal environment but 2-D sprites representing allies and enemies on the battlefield. The field can be rotated to four views in 90-degree increments, which helps the player figure out the lay of the land before making his move. The top screen of the DS displays a top-down tile map that gives an overview of the position of every ally and enemy on the board. All one can really ask of graphics in a game like this is that they provide an unambiguous view of where things are and facilitate the player's strategic development; after that, they should merely to stay out of the way except to provide feedback. At this task Disgaea succeeds admirably.

The battle gameplay itself is rock solid. It takes the 10v10 approach, and unlike the Ogre Battle/Tactics Ogre series there is no real penalty for death except for the money which must be paid to resurrect characters after the fight. You can keep a solid core of 10 allies and use them in pretty much every situation, but most players will want to stretch that roster to 12 or 13 for situations where specialists such as magic users, archers or melee characters are better suited to carry the day. Training up your team is a piece of cake, as any dungeon can be revisited and used as a proving ground for new blood. Difficulty ramps up beautifully, and the game is paced in such a way that, with the exception of the first five hours of gameplay, there is rarely a need to repeat a field with your core characters.