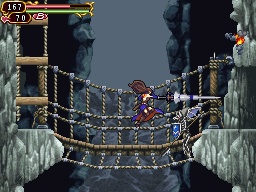 The Castlevania series has always been a boys club. From Simon to Richter Belmont, and even as the heroes started getting a little androgynous (here's looking at you, Alucard), the franchise has been fixated on basically one thing: dudes playing with their whips in dark, musty rooms.

It's also been in dire need of a real shot of life for some time now. Castlevania is one of gaming's most flagrant repeat offenders, with its years-old recycled sprites, tired rehashes of old ideas and cleverly placed veneers of fan service to throw us off the scent of lazy design. The Belmont boys have been sitting on their whips for some time, so leave it to the first Castlevania game with a female protagonist, then, to make the most drastic and successful changes to the franchise since Symphony of the Night seven years ago.

Order of Ecclesia is in the same vein as Symphony, to be sure. Like every handheld Castlevania, Ecclesia's a mashup of Super Metroid's vaguely non-linear map and Castlevania's undead slaying with some light-RPG elements (item drops, magic, experience) thrown in for extra addiction potential.

Ecclesia's changes to the formula begin with Shanoa, the game's heroine. Clad in knee-high boots, flaunting a thick head of waist-long, night-black hair and a bare back tattooed with burning red glyphs, Shanoa isn't exactly going to spark a gender revolution in the ranks of videogame protagonists, but she certainly is unique among the Castlevania pantheon, in more ways than one.

Not being of Belmont blood and thus lacking Vampire Killer-wielding abilities, Shanoa instead absorbs magic glyphs into herself (thus the funky tattoos on her back) and uses them to conjure a vast array of weapons, magic spells, familiars and more. Glyphs drop off enemies, and while there are plenty of them to collect, grind-a-holics and compulsive completists might be sad to hear there aren't nearly as many as in past Castlevania titles.

The rest of us, however, can be thankful. Having fewer weapons means that the ones you do have actually count for something, and finding new glyphs always feels like you're adding something to your arsenal rather than your collection. Glyphs can be combined to do screen-filling super attacks or, with the right combo, normal attacks can be used in rapid succession with precise timing - a neat little detail that keeps combat constantly fresh. You equip glyphs to X, Y and R and can customize three separate loadouts that you can switch between on the fly.

Unlike in previous Castlevanias where the only reason you'd ever switch ability sets is because you thought "hey, maybe watching that fire spell could be cool," using the right glyphs is crucial to survival Ecclesia. Enemy weaknesses are conveniently documented and can make or break a tough fight when it comes to both boss encounters and skirmishes with your everyday skeleton warrior. Ecclesia actually utilizes the variety it creates, keeping you constantly on your toes: You'll run into devilish scenarios that test your muscle memory as well as your magical aptitude, like rooms populated with one breed of giant floating monster that's weak to Holy attacks and another that's weak to Dark.