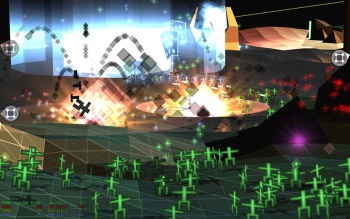 Developed by Introversion Software, the original Darwinia impressed upon the gaming world the idea that a game could look great and deliver unique gameplay without requiring a million-dollar production budget - Darwinia took up less space than a music file in some higher-profile titles. Its multiplayer adaptation Multiwinia: Survival of the Flattest is similarly modest, yet provides as idiosyncratic a real-time strategy experience as its big brother.

Where Darwinia has players rescuing tiny sentient programs - the titular Darwinians - from a marauding computer virus in an environment not unlike that of Tron, Multiwinia depicts the next unfortunate step in the Darwinians' evolution - war. The Multiwinians as they are now called have separated into different colored tribes and set about ethnically cleansing their rivals in an unending war.

As in Darwinia, Multiwinia's gameplay revolves around the use of "officer" units. Right-clicking a Multiwinian promotes it, essentially converting it from citizen into waypoint. Officers direct nearby Multiwinians to these designated locations. Placing officers near spawn points helps muster the reinforcements critical to forming suitably overwhelming mobs. You can also use officers to organize groups of Multiwinians into rudimentary ranks not unlike the musket brigades of colonial-era armies. Ranked Multiwinians have greater range and are more effective at rushing turrets, but they're also more vulnerable to area attacks such as grenades. Other than Multiwinia's use of formations and officers, there is no unit differentiation, alternative weaponry or upgrade system of any sort.

The main wild cards in a typical Multiwinia match are the periodic crate drops, which are scattered randomly across the battlefield . Crates contain a variety of special attacks or units. Rage temporarily triples the firing rate and damage of a selected group of soldiers (easily a tide-turner in a pitched battle), while gun turrets deny territory to the enemy. Ant colonies spawn tiny monsters that scatter formations and hamper movement, and harvester units gather up dead souls and deliver them to the nearest spawn point for resurrection. Crates on occasion also contain immediate benefits, like rockets or an instant batch of reinforcements.

The aptly-named Randomizer takes this element of chance even further by occasionally introducing crates with a temporary global effect, such as a "mega rage" that increases the damage output of all units or a "spawn mania" that briefly quintuples the output of every working spawn point. Some crates even trigger "crate mania," which spawn dozens of crates everywhere. The randomizer helps impart Multiwinia with a hectic, unpredictable pace that belies the game's otherwise simplistic mechanics.

Most of Multiwinia's game types center around spawn points, structures that, when manned by Multiwinians, periodically cough up groups of soldiers for you to organize and send into the meat grinder. Domination has players scrambling to control as many spawn points as possible, while King of the Hill pits tribes against each other to hold down a central territory. Blitzkrieg is a variation on the control-point style of the Battlefield series where Multiwinians jockey for position to capture point zones all over the map. Capture the Statue spawns a statue at a common location, which Multiwinians must fight to secure and drag back to a capture zone.