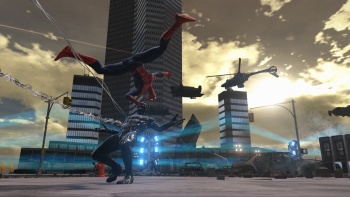 In June this year, a list of 14 potential Spider-Man videogames turned up on the web. The desperate litany of buzzword-heavy proposals and plucked-out-of-the-air concepts read like the minutes of an intense, borderline demented brainstorming session at Activision. Close your eyes and you can picture the bland corporate meeting room, a flipchart in the corner bearing the panicked scrawl "SPIDER-MAN LICENSE: WHICH WAY NOW?"

Whether the list was actually genuine, compiled for market research or just a canny piece of corporate misinformation is irrelevant - it confirmed the sinking feeling that, like the creatively-scuttled movie franchise, Spidey games had nowhere left to go. After the satisfyingly deep swinging mechanic of 2004's open-world Spider-Man 2 - basically Grand Thwipt Auto - the next two games diluted the demanding web-slinging system, hobbling the exhilarating sense of freedom you felt hurtling around, up, over and in between New York's distinctive architecture. (It didn't help that the most recent installment - co-op brawler Spider-Man: Friend Or Foe - was so childish it made Lego Star Wars look like Civilization IV.) So any tingling sensation I had about Spider-Man: Web Of Shadows was more likely to herald the onset of a cold sore than be a Spider-sense shiver of anticipatory excitement.

The confused opening certainly suggested it was going to be yet another spectacular misfire, with a gloomy webhead swinging in tepid slow-motion through the unfriendly neighborhoods of an alien-infested New York. As ever, he was moping about Mary Jane. There was also some business with Venom, the leering half-man, half-symbiote villain from That '70s Show.

The game proper eventually starts in flashback, with intermittent voiceover narration of the "At first, it seemed like any other day ..." variety. But once you're eventually left alone in the pristine city, exposition is replaced by gleeful exploration. You're still restricted to just one webline - looks like the dual webshooters of Spider-Man 2 ain't never coming back - but the controls feel tighter than they have for years. Movement is a freestyle combination of long, Tarzan-vine arcs, snap-forward web zips and nimble air spins. It takes a little while to re-master the transition from air to walls, but with practice you can wall-run or stop dead at will.

In a nod to Crackdown, there are hundreds of Spidey symbols scattered over the rooftops. Accumulating them increases your swinging speed and power, so following the breadcrumb trail doesn't simply feel like game-lengthening filler. (You can power Spidey up considerably before even tackling the first story mission.)

Spider-Man, Diversity and "Who Cares?" StewShearerOld 135 Comments
Comments on