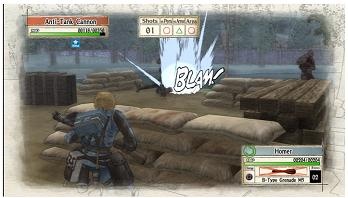 Valkyria Chronicles is a breath of fresh air in the stuffy subgenre known as the turn-based strategy RPG. However, its solid mechanics and excellent presentation are marred somewhat by oversights and snags that keep the tactical experience from being as smooth as it could be.

The early promotional text for Valkyria Chronicles implies that the game takes place in something of an alternate-history World War II (rather, "Europan War II"). That premise falls apart upon scrutiny; while the game world resembles western Europe in general shape, its setting is so thoroughly fantasticated that it could be set in pretty much any sort of world that loves Prussian-style uniforms and Panzer tanks. There are no real-world country names or borders, and little shared history or culture. Thankfully, that absence of connection doesn't affect anything but the marketing material.

The story takes place in the Principality of Gallia, a small country located where Denmark might be in the real world (if the real world was missing the Scandinavian Peninsula). Gallia is sandwiched between rival superpowers, the Atlantic Federation and the East Europan Imperial Alliance. As might be expected of a nation with "Imperial" in its name, the Empire invades Gallia in a step toward direct confrontation with the Federation, as well as to secure the peaceful principality's vast stores of Ragnite ore, the miracle resource that runs the world.

Valkyria Chronicles's greatest strength lies in its fantastic visual design, facilitated by Sega's proprietary CANVAS engine. In a unique twist on traditional cel-shading, all the textures, effects and objects in the game are colored and detailed with sketch-like lines. It doesn't sound like much, but the end results look great. Like concept art in motion, the sharply detailed designs of lead artist Raita Honjou give stark contrast to the "rough" coloration. Manga-style onomatopoeic text and emotion bubbles complete the spectacle.

The game's battle mechanics are nothing to ignore, either. Called "BLiTZ" for "Battle of Live Tactical Zones," combat works out as a mixture of real-time and turn-based systems. During each sides' turn, commanders can spend Command Points (CP) to activate individual units. Commanders can spend multiple CP on the same unit, allowing a given soldier to act multiple times in the same turn. Different units cost different amounts of CP to activate, making CP management the key to a winning strategy.

When activated, soldiers perform in real time, acting and moving freely about the battlefield. However, units can also be fired upon freely, also in real time. This factor lends a sense of urgency to every action, as vacillating too long in the middle of combat can lead to one's death. Units can crouch behind cover, fire mortars or grenades to destroy structures and use flanking tactics to force the enemy into deadly crossfire.