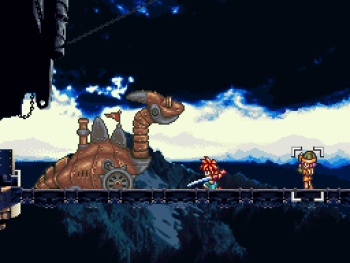 In battle, Chrono Trigger introduced a new "Dual" and "Triple" Technique system, which enabled two or more characters to coordinate techniques, dealing elemental and joint damage to enemies. Because character and enemy placement is so fluid, the location of enemies can affect which skills will hit which enemies, if any at all. This system feels very natural, and adds a level of strategy and technique-choice that feels absent from other games.

For the DS remake, the game introduces a new control scheme which leans heavily upon the touch screen, leaving the top screen to display the location of your party and nearby enemies. The player can choose to use the classic layout or the new DS layout, with each having its own benefits. Unfortunately neither is perfect. While it's easier to keep track of health and other information on the classic layout, the touch screen feels cluttered and messy..It's ultimately a matter of personal preference.

Chrono Trigger DS carefully and faithfully recreates the full soundtrack from the Super Nintendo with great accuracy, adding to the game's immersive atmosphere. Sound effects reveal a level of detail that provides a bit of realism in an otherwise fantastic setting. Critical hits land with a meaty "thunk," while attacking armored enemies produces a metallic clank. The sound emulation for the remake isn't perfect, however, and will occasionally fail to activate some sound effects during battle. Still, this is a minor nitpick that detracts very little from the overall experience.

The DS version's unique content, which includes a monster training and battling mini-game, an optional dungeon and a brand new ending, is appreciated, but feels minimal compared to the vast ocean of content the original version provides.This isn't something that should bother many people, however, because Chrono Trigger provides plenty of enjoyable gameplay no matter what platform you play it on.

Bottom line: Even though Chrono Trigger is 13 years old, it's still a wonderful RPG holds its own against modern titles.

Recommendation: Buy it. It plays like a checklist of good design choices, wonderful music composition, fantastic gameplay and careful attention to detail.