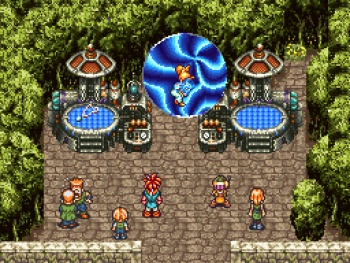 Chrono Trigger, published by Squaresoft in 1995, was a time-traveling adventure RPG featuring the (then) novel Active Time Battle system. At the time, it was a progressive, creative and interesting RPG the likes of which gamers hadn't seen before.

In 2001, Squaresoft ported Chrono Trigger to the Sony PlayStation, and very recently again to the DS in 2008 by Square Enix and TOSE. Even by today's standards, Chrono Trigger DS is a highly innovative and groundbreaking title with plenty to teach RPG developers about what they could do to improve upon the genre.

In Chrono Trigger DS you play as a young man named Crono in the year 1,000 A.D. at the start of a millennial fair. Your mother rouses you from your sleep and reminds you that your inventor friend, Lucca, will be unveiling a new machine at the fair. Later, Crono bumps into a stranger who wishes to go see the invention. One minor technical glitch later, the machine whirls the character into the past and sends Chrono into an epic adventure spanning past and future alike.

By the end of the story, Chrono Trigger offered you 15 original endings, and one new ending that's completely exclusive to the Nintendo DS port. Regardless of which ending you achieve, you have the option of starting a New Game+, which restarts the story while preserving your current level and items (without the plot-specific items, of course). Naturally, this extends the game's replay value immensely; Chrono Trigger is a title that could be played and replayed several times, with each play-through earning a new ending.

Chrono Trigger's gameplay is one of the best of any RPG ever released by Square Enix, and arguably among the best of all time, with a highly efficient use of the already existing ATB system and several ideas not found in RPGs since. Using an actual map of the field or dungeon as the battleground, Chrono Trigger shows the enemies on-screen as a part of the game's environments. Often, a bush will shake, releasing a host of monsters if you disturb it. When enemies appear, the characters will draw their weapons right there, fighting the threat from where they stood. The battle screen and map screens transition perfectly, from idle-to-battle with just the drawing of the characters' weapons.