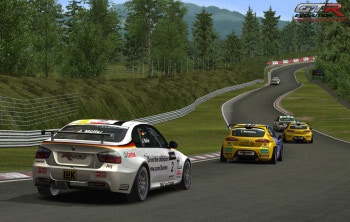 The racing game genre encompasses a diverse range of games, from the completely absurd to the extremely realistic. On one end of the scale reside the likes of Mario Kart, where the laws of physics are resolutely ignored and powersliding is not only effective, but often an imperative strategy. The other end of the scale is occupied by a variety of racing simulators, where accuracy is king and any attempt at The Fast and The Furious-style drifting will usually result in disaster.

SimBin Studios make games which fit very much into the latter category. Formerly responsible for the GTR series of grand touring car simulators, their latest release, GTR Evolution is no exception. GTR Evolution is essentially a racing simulator of the most accurate kind, focusing on bringing as many details from the world of circuit auto racing into the game as possible. An expansion to SimBin's previous title, Race 07, an officially licensed simulator of the World Touring Car Championship, GTR Evolution brings a broader perspective to a game which specialized in touring cars, adding new cars of several different classes, along with new tracks, including the legendary Nurburgring Nordschleife, one of the most famous - and infamous - race tracks in the world.

GTR Evolution goes for a more inclusive approach to circuit racing than SimBin's previous titles, combining the WTCC content of Race 07 with grand touring racers and production-class supercars, giving a great deal of variety and substance to the overall package. As the title of the game implies, the gameplay changes from SimBin's previous games to GTR Evolution are gradual rather than sweeping, building on a formula which has proven successful for the developers in the past.

Unlike many racing games, GTR Evolution takes an open-world approach to its content, with all of the cars and tracks available to the player immediately. While this lack of a structured approach means that many players may feel lost in their first few hours, it is of great benefit to those players who simply want to install the game and race immediately with the full content of the game.

GTR Evolution offers players an impressive list of options when creating racing events. Single races can be customized as the player sees fit, with options ranging from the number of opponents to race against to the weather conditions, and whether the race should have a practice or qualification event to precede it. The weather options are particularly noteworthy, as not only does the rain cause potentially adverse changes to track physics, but also affects visibility, as raindrops fall onto windscreens and helmet visors in a stunning display of attention to detail that continues throughout the whole game.

It is in the racing action itself that the game begins to pull away from most of the competition. While the cars in many racing games feel lifeless, as if they were simply conforming to formulae to create their expected performance, the cars in GTR Evolution feel completely unique, and more importantly for a racing simulator, absolutely realistic. Even the most minor touches by other developers' standards have been expressed, including full simulation of tire wear, downforce, road surfaces and even car damage should the player be unlucky enough to crash.