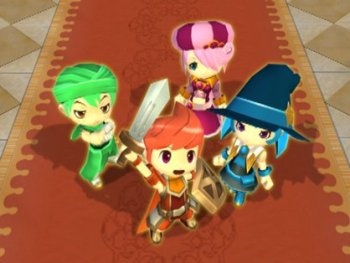 In the Dokapon Kingdom, you'll find shop-owning cats who seem to know the "meow" routine from Super Troopers, meet a mail delivery stork with a New York accent and be healed by a dog in a pope hat. You'll fight monsters with a pink mitten, deliver holy curry to the king and climb down into the depths of Heck. In other words, it's not like much you've played before.

Campy and odd, Dokapon Kingdom is not a game that's meant to be played alone. The title from developer Sting (Baroque, Treasure Hunter G) is a unique hybrid of board games and JRPGs that begs to be experienced with a group. Not only is playing the game much better with a couple friends, but having others around is crucial for getting the most entertainment out of Dokapon's more bizarre aspects.

Dokapon's main mechanic comes from board games, making it look like a Mario Party rip-off at first glance. Players spin a virtual spinner to move a certain amount of spaces on the map. Like Monopoly, different spaces let you perform different tasks. Some give you a random item or magic power. Some are shops where you can buy weapons and shields. Some make you fight a random monster. Unlike Monopoly, nobody gets to play as a thimble, though. Instead, you choose from three initial character classes, with the ability to change jobs as you progress. Thieves steal items from players as they pass by. Warriors are stronger. Magicians can cast magic twice before each turn.

Players compete against each other and the CPU opponents they've selected in many ways. In Normal mode, it's all about money. The kingdom of Dokapon is ruled by a rich king who's worried that a monster infestation will leave his peasants unable to provide him with tax money. He's offering the hand of his daughter Penny (dressed suspiciously like a certain princess from the Mushroom Kingdom) to the one who saves the kingdom. The backstory matters as much as the plots of Clue, Candyland or Fireball Island, though. What's important is winning.

The best part of Dokapon Kingdom is the huge number of strategies you can use to defeat your opponents. You earn the most money by liberating towns. Land on a town space, defeat the monster squatting there and the net worth of the town is added to yours. Land on the town again and you can invest money to increase its value, kind of like buying houses in Monopoly. You can also wait for someone else to risk their lives against the monster and then use a potion on the town to steal ownership away from them.

Or you can kick some ass. Landing on the same space as an opponent forces you into combat, and the winner can steal a town from the loser. Dokapon really makes beating your opponents rewarding. After defeating them, you can steal their towns, items, magic or gold. You can give their avatar a ridiculous haircut or vandalize their appearance. You can also change your opponent's name. And you don't have to settle for just "Poo," "Fart" or "Bum." With 14 character spaces available, you can really stretch your vocabulary out to bigger things, like maybe "Poo McFartbum."