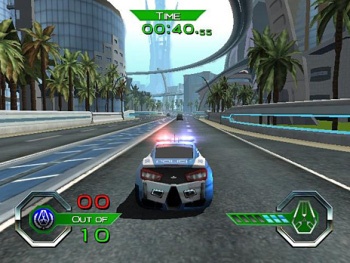 I imagine the brainstorming session for Emergency Heroes was one of the shortest in Ubisoft history. The game manages to crib ideas from every arcade racer from Rush 2049 to Burnout, plants them into a futuristic open-world environment that looks like an anime-ified version of the city from Crackdown and then - since it's on the Wii - slaps on some motion-controls for good measure.

There's nothing wrong with borrowing from genre hallmarks - that's how those hallmarks are made to begin with. But despite the obviousness of its influences, Emergency Heroes somehow remains so thoroughly generic and devoid of substance that even as it achieves some minor victories it's ultimately a completely forgettable experience.

Emergency Heroes has the look and feel of a cheap Saturday morning cartoon, and it's got the premise of one, too. Zach, a plucky kid who never passed the exam to become an Emergency Hero (an elite rescue team that's like the S.W.A.T., firefighter and EMT team rolled into one) gets a distress call one day and suddenly finds himself - you guessed it - playing hero for a day and saving the city.

The metropolis in question is an open-world environment, so you're free to cruise around, putting out a fire here or arresting someone speeding there, but aside from those occasional minor tasks, there's not really much to do in the city itself. There aren't any jumps, hidden goodies or street races to discover. There's not much to look at either. The skyline is mired in N64-era fog, the architecture is ripped out of Generic Future West Coast City No. 1, buildings look like they're built from Play-Doh and everyone here seems to live in their car, all the time.

The bulk of Zach's hero work takes place in missions scattered around the city map. You pull up a menu and choose your task, and giant green arrows mark the road to tell you where to go. Usually you're either running down a nasty criminal and ramming them X amount of times to win, putting out a fire by driving around in a circle mashing A to fire water (there's a hose attached to your SUV, you see) or rescuing some hapless citizen whose annoying pleas for help are on a constant loop. Each mission type is essentially a variation on the same old song: They all boil down to driving through checkpoints and extending your time limit (though the game gives you ample time to begin with).

Most of these missions are horrendously easy and get pretty damn boring by the third or fourth time you do them. They're also oddly out of context: Instead of being built into the city, you simply drive up to a checkpoint and get transported to a separate closed circuit where the mission takes place. The "street cleaning" missions fare well: You get a police cruiser with a huge ram and barrel through walls of debris someone carelessly left in the middle of a closed circuit highway. Canned explosion effects abound, but it's stupid fun.