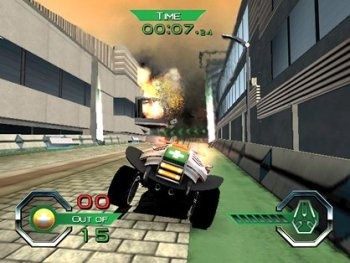 It's just odd, then, that for all the big picture stuff like mission or world design that Emergency Heroes couldn't care less about, the game manages to get one of the trickier things about a good Wii game extremely right: The motion-based driving controls are great. It basically works the way you'd expect - you steer by tilting the Wii remote, with gas, brake and boost assigned to buttons. Turning and powersliding require a delicate touch, but once you've got the hang of it, driving is responsive, satisfying and makes some of those dull "chase down the bad guy" missions fairly entertaining.

That being said, the controls would've worked better in a straight-up racing game that in the open-world environment of Emergency Heroes. Turning and drifting at high-speeds is a blast, but when you're not putting the pedal to the metal it's hard to maneuver around. Getting onto tiny ramps, into garage doors or backing out of a tough spot is a huge hassle, as you can never really gauge how much you should be tilting the Wiimote. The game really only shines when it puts you on a track and tells you to go, go, go, so why Ubisoft would attempt the doomed-to-failure technical feat of making a rich open-world game on the Wii and spoil the surprising success of the driving controls is beyond me.

So, Emergency Heroes is the rare Wii driving game with halfway decent controls, but drops the ball when it comes to everything else. What's a gamer to do then but try to make his own fun? The joy of games like Burnout is in wrecking your fellow commuters, and while Emergency Heroes doesn't have the complex car-smashing algorithms or fancy physics of Criterion's franchise, there's still plenty of fun to be had. That's mostly because the game seems to want to discourage you from delinquent behavior - you're supposed to be an Emergency Hero, after all. Ramming into commuters results in the driver's portrait showing up on the screen and hilarious sound bites like "Dagnabit, mah car!" or "You're an Emergency Zero!"

That's the experience I imagine most adult gamers will have with Emergency Heroes - quickly bored with what the game has to offer, they'll start entertaining themselves within its decidedly bland open world. As a bargain bin title with simple objectives and solid mechanics, though, this wouldn't be a bad choice for a gamer dad or mom to pick up and play with their kid. They'll probably get a big kick out of the "Emergency Zero" line - I know I did.

Bottom line: A hollow open-world racer with solid motion controls but zero content. It's too shallow for adults, but the colorful characters, fun driving and easy objectives might make it decent entertainment for the younger set.

Recommendation: Rent it for your kid brother/sister/cousin/niece/nephew, or leave it to bargain bin perdition.