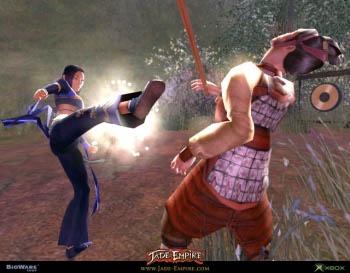 There is an old Chinese proverb that states "small flaw is glaring on face of perfection." Jade Empire takes this proverb and runs with it.

An action-RPG from the BioWare stable, Jade Empire comes so close to being a classic it's scary. Yet small imperfections hold this game back from being special..It's rare to play a game where its tiny flaws and questionable design choice are so evident, and it's only because the game without these errors in judgment would be one of the greats.

Jade Empire puts you in the shoes of a young warrior charged with rescuing your master and bringing back a harmonious balance between the land of the living and the land of the dead in a grand old tale in the tradition of Kabuki theatre. From there, your character will pick up a rag-tag army of supporting players as you wander the feudal orient.

Oddly enough, though, all of the denizens of the world seem to be able to speak perfect North American English. It's jarring to hear characters harp on about ancient Confucian wisdom when it sounds like they'd be more interested in ordering a hot dog. If you're going to set a game in feudal China, perhaps Cantonese would have been a better way to go - of course, you can just turn your TV set on mute and just enjoying the setting like you would a great Hokusai.

BioWare really went to town on the environments here, unafraid to paint with a broad brushstroke. The result is a colorful and character-filled world where the story plays out on a grand stage. You won't particularly mind traveling across town for a fetch-quest because it gives you an opportunity to gaze in wonder once again at the well-crafted buildings and cobbled streets. Luckily, there's more than scenery to this game. In amongst the tranquillity lies a furious wind, and it is called "a can of whoop-ass."

There are four styles of melee combat to choose from, two of which are associated with a specific weapon. You'll soon find yourself very comfortable with these styles; combat is never a burden, and you can focus on delivering maximum damage to uppity guards rather than grumbling about broken combat mechanics. You can learn lots of different varieties in these styles, but once again the glaring imperfection is that you will never have sufficient XP to learn them all. It's frustrating to know that these varieties are out there, and tragic to know that you'll probably never use them.