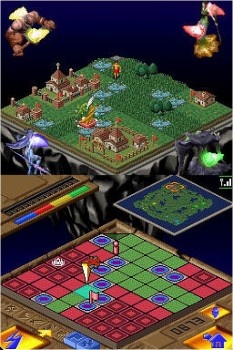 Looking down at the teeming masses of unwashed, ant-like peasants meandering around the rugged landscape building cities and waging war in my honor, it's hard to ignore the intoxicating feeling of power with every flex of my godly muscles. With a flick of a finger, mountains rise from the earth. Another simple motion sends terra firma crashing down into the watery depths. A glance summons a fiery apocalypse to destroy the cities of the unbelievers who oppose my divine glory. Being a pissed-off deity in the pixilated world of Populous DS is frequently awesome, but it can also feel surprisingly limiting at times.

Peter Molyneux's seminal PC god game first put players in the role of dueling rulers of the universe almost 20 years ago. Back then, Populous was revolutionary in its design. Instead of merely forcing you to run errands for some omnipotent deity, the game had you playing as the deity, letting you indirectly orchestrate the actions of your mortal servants from on high. For better or worse, the DS remake of the award-winning game stays very true to the original, while expanding in some areas to reward fans of the series. The classic gameplay now feels a touch outdated. Still, the nostalgia factor is significant, and stamping out a large swath of tiny adversaries with a well-placed meteor offers a tremendous level of satisfaction.

By design, Populous DS is best enjoyed in short sessions. A simple introductory story about godly conflict and a demonic uprising sets the stage for what are essentially a series of timed cage-matches between the good deity of your choosing and a rival demon god. This time around, you're given the opportunity to pick from five different gods (once you've unlocked them) that each possess a unique set of elemental abilities. At the onset of battle, a small number of followers from each side are dropped into colonies in different regions of the map. By raising and lowering the landscape and directing your peasants, you'll provide prime real-estate for them to expand their infrastructure, grow in number and raise your pool of precious psyche energy needed to unleash powerful attacks upon your adversary and its minions.

Between expanding your mortal empire and attempting to hinder your opponent from doing the same, you must race to accrue the most power before time runs out. When the clock strikes zero (or the balance tips enough to one side to trigger it manually), a glorious Armageddon erupts. Amidst an orchestral din and bolts of cataclysmic energy, the followers of both sides will congregate to a single point on the map where they will pool their strength and engage in a final melee of epic proportions. The last one standing is declared the victor. Unless you manage to gain a sizeable advantage over your opponent from the get-go, battles will often wrap up a little too close for comfort. It sometimes seems like only a handful of extra mortals on one side or the other can make the winning difference.