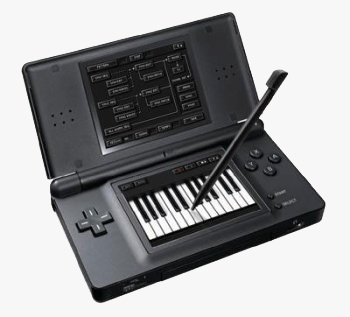 Ask any chiptune artist and they'll tell you: Music just sounds better when it's piped straight out of the headphone jack of a gaming device and into a cranked PA system. Classic Game Boys may be the preferred tool among many such musicians, but the Nintendo DS is proving to be an increasingly strong platform for music creators. Mixing a touch of the '80s with the portability and stylus-input of Nintendo's latest handheld, the KORG DS-10 Synthesizer is an awesome new weapon to add to your audio creation arsenal.

Toshio Iwai's delightful Electroplankton first tested the waters of music creation on the DS, with very limited song generation elements that emphasized experimentation over actual composition. Still, users found ways to work the game's sounds into songs and recordings. Last year, Jam Sessions turned the DS into a fully functioning, portable acoustic guitar that spawned a flood of creative and goofy ballads. Though both of these games let users dabble with music making on the DS, AQ Interactive takes things to the next level with the KORG DS-10, an upgraded pocket version of the KORG MS-10 synthesizer produced in the late '70s and early '80s. Not only is it easily the most robust officially released music creation software for the handheld to date, it's seriously fun to just noodle around with.

The DS-10 is more of a tool than a toy, so don't expect to find any real gameplay elements here. The "play" component is found in the act of making music. This alone is engaging enough to consume entire days of your free time once you get familiar with how things work. The DS-10 gives you a four-channel drum sequencer, two separate keyboard synth channels, a 16-step song sequencer and a handful of neat FX gizmos to craft your tunes with. Alongside these core elements from the classic synthesizer are plenty of minor updates and tweaks to the DS that make it a lot easier to create tunes on the fly.

What's great about making music with DS-10 is its flexibility. Instead of piecing together lamely pre-recorded and condensed samples, you create your own synth sounds that you can play through the on-screen keyboard or by manually inputting notes into a sequencer. In either case, the stylus is a perfect tool for manipulating knobs, adding notes and tapping keys. Each synth channel starts with a basic sound that you can tweak and modify with various FX. It's possible to create a broad range of tones, from smooth bass lines and retro blips to jagged shrieks and cheesy Atari-sounding sweeps. Overall, the sound quality is extremely impressive, and the KORG emulation is near perfect. Other tools like FX patches and the real-time modulation KAOSS Pad let you throw down some far-out noises amidst more structured synth lines. Even better, the DS lets you store these custom sounds for later access - a feature that wasn't possible on the original KORG hardware.