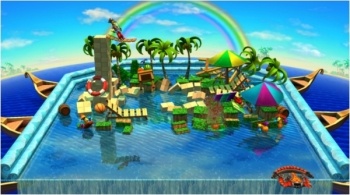 I've long held a fascination with the premise of bouncing balls against inexplicably floating brick walls, though only in video games - all the bricks I find in real life are frustratingly bound by gravity, and besides, vandalism's really not my thing. But the allure of individually dislodging pieces from a carefully constructed design with a paddle and a ball has endured through the years via games like Arkanoid, Alleyway and some generic knock-off I downloaded to my high school graphing calculator a decade ago.

Magic Ball tries to take the basic premise of such titles and bring it into the modern era. While not the first game to attempt this style of game with a 3-D interface (genre originator Breakout had an ill-received PSOne/PC iteration), it may very well be the first to completely do away with the established template of knocking out various types of bricks or blocks at fixed positions. Instead, Magic Ball presents colorful 3-D arrangements filled with the likes of pirate ships, castles, medieval knights and towers comprised of oversized playing cards. As if the concept of launching a ball at hovering bricks wasn't silly enough, now you're firing soccer balls at giant sharks that float along in formation.

Aside from the obvious aesthetic shift, Magic Ball plays very similarly to its spiritual predecessors. The game employs an isometric perspective that depicts the entire game board, which, unlike most 2-D genre entries, is not entirely rectangular in shape. Rather, the expected corners on each end of the board are replaced by diagonal walls that may deflect the ball in a different direction depending on the angle of the shot. Despite the atypical board design, similar strategies prevail, like getting the ball between the top of the board and its contents, allowing you to sit back and watch each successive bounce remove even more of the puzzle.

Following in the footsteps of Arkanoid and other brick-busters that utilize power-ups, Magic Ball features a wide array of weapons, special attacks and modifiers that will - in most cases - help you clear the screen more quickly. Downed objects on the screen will occasionally spout out collectables that can outfit your bow-shaped paddle with a firearm (machine gun, cannon, laser, etc.), increase or decrease the size of the paddle, let you hold any ball that comes back your way or change the style of the ball (into the schizophrenic crazy ball or unstoppable iron ball, among others). Meteors and lightning bolts offer a bit of destructive help, while wind gusts and hammer-induced earthquakes are more amusing to watch than actually beneficial in completing a stage. Regardless, having such a wealth of available pick-ups keeps things interesting, even if a couple are largely detrimental to your success.