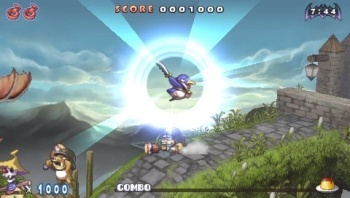 When a game starts you out with 1,000 lives, it raises some red flags. Such a high number brings the ominous expectation that you'll die horribly and with great frequency over the course of the adventure. Why would a game need to give players so many opportunities to kick the bucket? There's only one answer: Underneath the adorable, penguin-laden exterior of Prinny: Can I Really Be The Hero? is a heartless, bloodthirsty, unforgiving beast of a game that wants to grind your soul into itty bitty pieces and then vomit them back at you. Even worse, there's a good chance you'll enjoy being brutally savaged by this charming and addictive action-platformer.

Much like the way Moogles and Chocobos have become informal mascots of the Final Fantasy series, it didn't take long for Prinnies - peg-legged, bat-winged, occasionally demonic blue penguin servant creatures that tend to explode when they're handled a tad rough - to become favorite characters among fans of the Disgaea series. Their amusing personalities include a proclivity for exclaiming "dood!" at the drop of a dime and a fondness for bombs and machetes. It was only a matter of time before the endearing critters were given a chance to star in a game of their own.

Prinny: Can I Really Be The Hero? features the same wacky humor and stylish presentation the Disgaea series is known for. In the dark recesses of the Netherworld, a gaggle of Prinnies find themselves facing the fiery wrath of their master Etna when her favorite sweet snack goes missing. Etna issues an ultimatum commanding her Prinny slaves to fetch the necessary ingredients and return with her Ultra Dessert or face a fate even worse than ... well, being a Prinny. Wielding a scarlet scarf that inhibits his explosive nature, a Prinny (who's conveniently named "Prinny") sets out to do his master's bidding.

As a meat-and-potatoes action-platformer, Prinny takes its gameplay cues from the classics. The titular penguin can run, jump, slash at enemies with his dual machetes, pick up bombs to chuck and pull off a few other basic moves. From a central hub that's riddled with unlockables, you'll initially choose from six themed stages to romp through. Navigating them is a matter of jumping and pummeling your way through an obstacle course of pitfalls, traps, enemies and precarious platforms. A grueling and often comical boss battle awaits you at the end of each area. The order of your selection is important, since beating each level advances time in the game. As nighttime slowly approaches, subsequent levels shift and gradually become harder. Monsters, level layout and boss encounters change, depending on the time of day in the game.