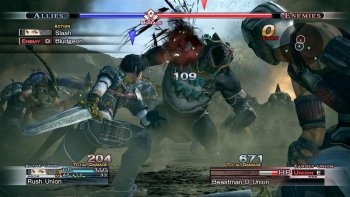 Xbox 360 JRPG fans have had to suffer through some pretty substantial dry spells over the console's lifetime. Our patience hasn't gone unrewarded; with The Last Remnant coming a little under three months after Tri-Ace's Infinite Undiscovery, it seemed like the drought was finally over. Unfortunately, both games left me with a similar sinking feeling: You may not feel be driven to quitting, but The Last Remnant isn't likely to bowl you over with its story, battle system or even graphics - and who expected Square Enix to miss the boat on that one? It's sort of their thing.

To get it out of the way: The frame rate chugs. It chugs pretty hard at times, actually, and the texture pop is not even just one simple pop - it's this painstaking process of multilayered pops that each take their sweet time until finally, finally the marquis' coat has all of its various braids and embroideries. And it's not even only during the battles, where the muddy under-layer of frog-people skin suddenly grows some dapple; loading areas and even cut scenes stumble in the same sloppy way. Copying the disc data onto your Xbox 360 hard drive helps - if you have the room. The first disc alone is 6.1 GB. You can decide for yourself if you support setting the precedent of having to install a game to even reach graphical acceptability.

Thankfully, there's more going on in this game than dropping frames. Our predictably rookie protagonist, Rush "The winner's the one who strikes first, yeah?" Sykes teams up with David Nassau, the Marquis of Athlum, and company to rescue his kidnapped sister, Irina. She happens to be heir to an astonishing amount of Remnant-wielding power that, of course, isn't entirely unprecedented. It's like Secret of Mana taught us: History repeats. Between a mysterious brute known only as the Conqueror and Duke Hermeien's plot to reign as the new God Emperor, there is enough political intrigue to keep you busy even as you try to puzzle out what exactly these magical Remnants are to begin with.

Since David is a marquis, he has considerable military resources, and he'll lend you his generals often. As the game progresses you'll also be able to hire mercenaries and recruit soldiers to max out your active party at 25. That's a lot of characters to manage, but The Last Remnant handles battles different from other JRPGs: Instead of selecting actions from a menu for each character, you give dynamic orders to a whole unit (of up to five characters) at a time.

These orders can be as simple as "Attack," but depending on circumstances you may find "Back them up!" or "Give it all you've got!" Some of these general directives combine healing or other magic with attacks, depending on the particular unit's capabilities, and once in a while a unique ability like Rush's Omnistrike will show up. At first I was really into the changeable menu, but after a while I began to miss manually selecting the special move I wanted to perform. It felt like the game was almost on autopilot.