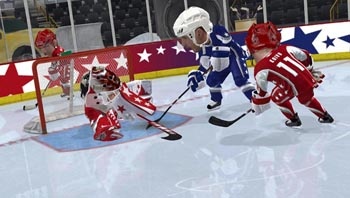 Once you're south of the Canadian border, the impact of hockey wanes significantly. For the majority of folks in the United States, the icy pastime bows to football, baseball, and basketball, and "The Stanley Cup" is a name often unheard beneath the bellow of "Superbowl," "World Series," or "March Madness." Because it's last in line, the NHL series has a limited appeal despite its phenomenal quality. Meanwhile, each Madden release is gobbled up by anyone who could estimate the color of the sky.

The general idea with 3 on 3 NHL Arcade is that anyone - hockey nut, gaming nerd, or non-gamer - can enjoy the simplified sport as they hastily zip around the shrunken ice rink, flattening big-headed players with proportionally huge hits. The game is essentially adopting the sensibilities of EA's All Play lineup, which aims to make sports games more accessible for new players, but is being digitally distributed through the PlayStation Network and Xbox Live Arcade.

To reach that wide audience, NHL Arcade is very simple. Without rules like offsides, icing, or penalties to interfere, games move at a mercilessly quick pace. As a result, it's very easy to start scoring goals whether you're intimately familiar with the console series, or oblivious to its existence. The classic controls cater to the casual crowd by tying shooting and passing to basic button presses, while NHL veterans can comfortably slip back in to the familiar feel of the all-analog Skill Stick system. Cool maneuvers like lifting an opponent's stick or ringing off a trick shot are equally easy to execute across both schemes, but using the advanced settings gives you access to nuances like faking shots, diving, and protecting the puck.

Not unlike the NES classic, Ice Hockey, you'll choose three NHL superstars for your team prior to each match. Each of the 36 players boasts one of three predetermined statistic settings: big dudes are tough and slow, small skaters are swift but weak, and the all-around players balance strength and speed. Don't be surprised to find yourself asking "do I want lumbering defensemen to back up my quick forward, an even mix of three all-arounds, or something else entirely?" Mixing up your all-star team with various players injects a wee element of strategy to NHLA without being overwhelming.

Putting the "arcade" in NHL Arcade is the stellar set of power-ups, which can literally be beaten out of opponents. You can aid your offense by boosting the speed of a skater and his shot, shrinking the other team's goalie, and earning two-for-one goals by nabbing the appropriate glowing objects. Alternatively, freezing an opponent's player in place and fattening up your already overweight goaltender does wonders when you're struggling on defense. As expected, simultaneously freezing a player, increasing your size, and picking up a super shot radically tips the scale in your favor. With realism and rules out the window, chaotic fun outweighs technical depth.

Starting up another match after the buzzer sounds is irresistible if you're playing with three trash-talking couch competitors or five others online. Extended sessions had me aching for something new, but you'll find just one game mode available from the main menu. There's a coin-op mentality to NHL Arcade in that it's deliberately limited to focus on what it does right. In this case, it's the large pockets of entertainment to soak up in five to ten minute chunks. The absence of a career mode or advancement isn't wholly relevant to the new player, but avid fanatics of NHL 09 will soon find themselves retreating to their retail copies to satisfy their penchant for progression.

What NHL Arcade ultimately succeeds in is being unabashedly enjoyable. By running on the same engine as NHL 09, this downloadable title feels like a legitimately great hockey game rather than a dumbed-down port. The clever items and cutely exaggerated aesthetic give it a unique brush of creativity, while the nods to arcade and console classics lend wonderfully to accessibility. It's just a shame that ten bucks buys but one game mode. Seasoned players will miss the Create A Player, career mode, and instant replays, but they'll still be able to have a blast by pummeling players over the boards and picking up power-ups. This is a great gateway to hockey, and a wildly entertaining one at that.

Bottom line: 3 on 3 is pure, brazen fun in the form of a sport you didn't know you loved. It's wicked-fast, easy to play, and almost universally appealing. Hockey jocks will be kind of bummed by the lack of game modes and extras in NHL Arcade, but they'll have a rad time with newcomers and fellow pros alike regardless.

Recommendation: Tie up your skates and hit the ice. Ten bucks seems steep initially, but you'll be having so much fun when the puck drops that NHL Arcade's limitations become irrelevant.