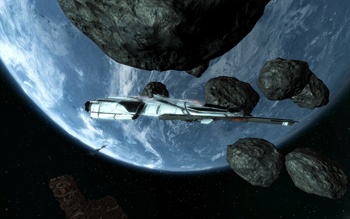 Space is big. Really, really, really, really, really big. Huge even. If you stood on an infinitely long beach, holding an infinitely large handful of sand, I still couldn't come up with a salient metaphor to explain how gigantic space is. Due to its immense size compared to anything else in existence, the law of averages dictates that space must appear as the setting in a number of videogames. Everything from Mass Effect to Knights of the Old Republic (and even some games made by companies other than BioWare) often use the infinite starscape as a backdrop.

What few of these games accomplish however, is a gameplay system that offers depth enough to match the inscrutably vast setting. Those that do -- Elite and Freelancer come to mind -- are hailed as true classics of the genre.

Egosoft's X series is something of an also-ran (or for those rabid fans, "the little series that could.") Each of the entries in the series has promised the immense scope and endless replayability of games like Elite, and while every one has so far exhibited some flaw that keeps them from being truly outstanding, Egosoft has exhibited a keen instinct for recognizing and fixing its flaws. Version 2.0 of PC title X3: The Terran Conflict still falls just short of being a classic, but certainly ranks as the best, most polished X title so far.

Seems simple enough, but when those basic principles are then filtered through diverse missions and years' worth of universe development, the actual game rivals most roleplaying games for length -- and that's assuming that you're a prodigy with X's nebulous control scheme.

First and foremost, let me say this for the latest versions of X3: The controls here are as simple and streamlined as the series has ever seen. Second and somewhat less foremost however, I have to stress that calling X3's controls "simple and streamlined" is like saying Hitler misunderstood Nietzsche; While it's a relatively true statement, its such a huge understatement as to render the claim nearly moot.

To wit, a story from my own experience: On first firing the game up I was sitting adrift in space. I wiggled the mouse a bit and realized that only spun my view around. Figuring nothing good would come of endlessly staring into space, even from new and interesting angles, I set out to learn how to do something, anything else. I tried the usual suspects: The "Enter" key, the "Spacebar" -- I even accidentally hit the "Tilde" -- but none of these would move me an inch. After 20 minutes of clicking and reclicking, I finally discovered a method of locomotion, buried under the third layer of a menu system that was only partially helpfully labeled.