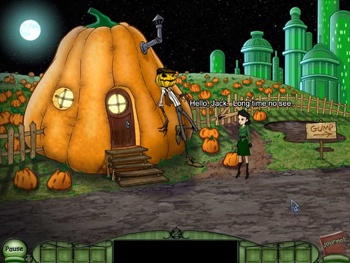 Adventure games are a tough sell these days. The abundance of games with amazing visuals, complex stories, and online multiplayer makes small point-and-click puzzle solvers seem quaint - or even antiquated - by comparison. So it's not exactly surprising that people don't rush to their computers when you tell them about a great new adventure game. But that's exactly what I'm asking you to do, because Emerald City Confidential deserves better than to be written off as just another casual game or shrugged away as an ordinary adventure game. It's just too damn special.

Confidential is a noir mystery set in the Land of Oz - L. Frank Baum's Oz, that is, not the land Down Under. You play as Petra, who was in the Ozian army during the great war against the Phanfasms, but deserted when she learned her baby brother had vanished. Now, almost twenty years later, she ekes out a living as a private detective, working out of a shabby little apartment in the seedy section of what used to be the jewel in Oz's crown, Emerald City. Things have gone steadily downhill since Queen Ozma outlawed magic at the end of the war; what was once the Merry Old Land of Oz is now a morass of corruption and vice.

Dorothy and the gang are still around, but a lot has changed in the 40 years since she first blew into town. The Tin Man's now the Governor of Winkie Country, a powerless figurehead who spends his days guzzling the hard stuff. The Lion's a crooked lawyer who dangles Petra over a bridge when she gets too close to one of his shadier operations. As for Miss Ruby Slippers herself, she gets Petra involved in Confidential's mystery by hiring her to track down Anzel, Dorothy's would-be fiancé who skipped town. Pretty dark stuff, but the game draws its inspiration from the Oz books, which were far less light and fluffy than the dancing Munchkins and songs of the movie might lead you to believe.

While you might be somewhat intrigued at this point, you may very well also be saying to yourself, "I am somewhat intrigued but...adventure games suck." And you're not wrong. Well, not entirely. Most adventure games suck. They tend to confuse "challenging and intelligent" with "overly obtuse" and thus contain puzzles that are frustrating, obscure, and pretty much the antithesis of fun. They also frequently put too great an emphasis on item collection and while shoving random bits of junk in your pockets is kind of a kick when you're five, it loses some of its charm when you're an adult and the junk is virtual.

Emerald City Confidential still has you collecting junk, of course, but not nearly as much of it. You acquire a few things here and there, as well as a handful of spells that you'll need to solve some puzzles, but for the most part, you progress through the game by putting Petra's detective skills to work. Conversing with the locals is key to solving the mystery, and understanding Oz's complicated history. And so we come to the reason I'm desperately hoping you try this game - the story is simply fantastic. The noir twist to the magical characters and setting shouldn't work, but it does, and beautifully. Jack Pumpkinhead really does have a pumpkin for a head and has absolutely nothing whatsoever to do with the smuggling of illegal magical artifacts - just try to prove otherwise. The Frogman - a talking frog in a smoking jacket - is blackmailing half the residents of Winkie Country. The silliness of the setting prevents the plot from ever getting too grim, while the darkness keeps Confidential from ever feeling like kids' stuff.

The actual game part of Emerald City Confidential is extremely easy. The puzzles are clever and nicely-crafted, but you should have no trouble sailing right through them. Doesn't matter - the puzzles aren't why the game is so rewarding, the storytelling is. The characters are unique individuals, not just generic clue dispensing machines. The story itself has all the hallmarks of classic noir: heartache, betrayal, broken dreams and small slivers of hope. In truth, Confidential is more like an interactive novella than a game; think of it as an animated graphic novel, if it'll help you choke down the bitter taste of playing a casual game. (Oh, come on, people, don't tell me you're "too hardcore" to ever visit a site like PlayFirst.)

Bottom Line: I'm not trying to shove this down your throat because I think adventure games are a woefully-underappreciated genre (though I do), but because even though we're barely through March, I know that Emerald City Confidential will be making my Favorite Games of the Year list.

Recommendation: Emerald City Confidential is nothing short of brilliant, and also comes with a one hour free trial, so give it a try. Don't miss this gem of a game.

Susan Arendt is kind of hoping she spontaneously suffers amnesia, so she can play through Emerald City Confidential again like it was brand new.