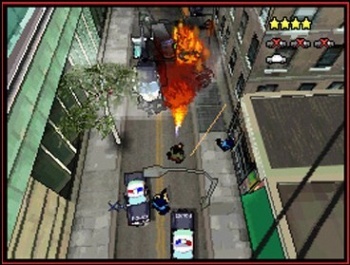 Grand Theft Auto: Chinatown Wars is a significant departure for the series. It's partly out of necessity - the cinematic nature of previous Grand Theft Autos could not translate to the DS. The idea that each GTA entry should be nothing less than a wholesale investigation of a particular American cultural moment was, Rockstar realized, appropriate for the television, but not your handheld. Gone are the shimmering cities and expressive cinematics and in their place comes a new emphasis on gameplay. Chinatown Wars is still Grand Theft Auto, but not quite like any I have played in recent memory.

Chinatown Wars is still very much about stealing cars, shooting people and generally making your way up the ranks of the criminal underworld. This time, you play as Huang Lee, a low-level member of the Triads, a gang of Chinese drug smugglers. You find yourself working for multiple crime bosses who provide the basic mission structure on top of the usual "do whatever you want" template. The difference is the variety in these missions. Previous GTAs, for all their visual splendor, rarely advanced beyond basic escort missions and snatch-and-grabs. By utilizing the DS's touch screen, Chinatown Wars escapes those narrow constraints and achieves a level of direct interaction and straightforward gameplay that other entries in the series have never reached. One mission has you drive an ambulance while escaping from the police, and during this high-speed chase, the patient you're transporting keeps flat-lining. You have to repeatedly resuscitate him by tapping the screen furiously, while at the same time staying ahead of the aggressive police cars.

Chinatown Wars has taken the best examples of DS gameplay and incorporated them throughout all aspects of the game. It employs the touch screen in mini-games for hotwiring cars, making bombs and searching through dumpsters. The game is also a step back to the more ridiculous fun associated with San Andreas, with mini-guns and tanks making a welcome return. Anybody who played the game Drugwars during math class on his Texas Instruments graphing calculator will instantly feel at home in with Chinatown Wars drug-dealing side game. It's a surprisingly subversive move for such a family-oriented platform, but it's also a lot of fun. In fact, I spent more time trading narcotics than I did on Chinatown Wars's actual missions.

Compared to other GTAs, Chinatown Wars' visuals are a secondary concern, but that doesn't mean they aren't done well. On the contrary, Chinatown Wars is a technical wonder on the DS. Liberty City is once again a clockwork marvel with tons of cars, unique buildings and people going about their lives. Players witness the game from a bird's-eye view, although the exact angle is constantly shifting. The cel-shaded graphics are impressively rendered in full three dimensions. In some ways the Liberty City of Chinatown Wars is even more impressive than the one in GTA IV: Its crisp lines and colors a welcome departure from the dull muddy colors of its console counterpart.