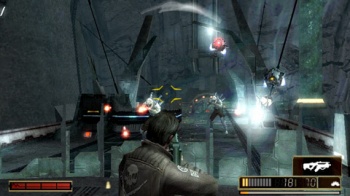 The Resistance series is one of the most cynical brands in the videogame world. It reeks of focus group testing, plays it safe to the point of boredom and the series' premise is as uninspired as its gameplay. It's no small wonder then that Resistance: Retribution, a presumably modest entry on the PSP, manages to breathe life into this corpse of a franchise. I don't mean to imply Resistance: Retribution is in some way a groundbreaking re-imagining of the series - it isn't. But it is an example of first-rate craftsmanship. It's a refreshing reminder of just how good a game can be despite tired trappings and familiar gameplay. Resistance: Retribution is a confident, cohesive gem of a game that deserves everyone's attention.

If this game were broken down into a list of features sitting on the back of it's game case, it would be thoroughly unremarkable. Alien invasion, third-person shooter, cover system, multiplayer, etc. But it's all done so well, especially in light of the big-budget failure that is Resistance 2. This game's great strength in the single-player campaign is pacing and variety. It is a third-person shooter but instead of just routing you down corridors like an on-rails shooter, the game has you perform a variety of different activities in each level, that although trivial on their own (like jumping on top of boxes or breaking through a boarded door), are varied in such a way so that the game never feels slow or repetitive.

I wouldn't say this game is a particularly tactical or skillful shooter. The enemy A.I. is pretty basic, and the excellent cover system works in such a way that shooting becomes a matter of timing when you rise between enemy shots. The game also uses an auto lock so that aiming never really comes into play. The developer realized that there were limitations to the control scheme the PSP could employ, because long protracted firefights never really occur. Resistance: Retribution is a run-and-gun game, but you rarely find yourself shooting in the same circumstances. There are many games where you find yourself shooting at enemies in the same corridors and from the same distance throughout the entire game. Resistance: Retribution has you running for cover and utilizing the environment at some points, and at other times you run about in the fashion of a more traditional FPS.

Bend Game Studio has also done an excellent job with the environments. Although it's basically a corridor shooter, the game does an excellent job of making the areas you're in feel organic in the way they progress. Resistance: Retribution establishes a strong sense of place through attention to detail and an understanding that dramatic locales aren't always the most convincing. The game skillfully avoids that feeling that my character and the environment are two separate things, not meant to be in each other's company. The environments show a deep understanding of what players will and won't be able to swallow given the PSP's limitations. This is an extremely difficult thing to do. Playing this game made me realize that realistic textures and lots of polygons just aren't enough - for a game to feel right, visually, there has to be a harmony between everything on the screen, a uniformity in presentation that goes beyond mere art design.