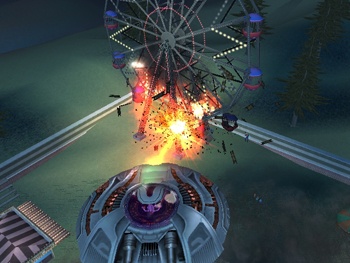 Developed by the Australian branch of Pandemic Studios, Destroy All Humans!(now available as an Xbox Live Original) is a third-person shooter like no other. Set as a parody of B-grade horror flicks in 1950s America, you play as Cryptosporidum-137, an alien invader who has discovered that humans have captured his clone. As Crypto, it is your goal to save your "brother," collect enough human DNA to cure your species' reproducing problem, and crush any pathetic monkeys that stand in your way.

Destroy All Humans!'s humor is its strongest aspect as it picks apart the cultures, lifestyles and beliefs of 1950s so beautifully, yet so hilariously. The game's B-movie butchering is quite a joy to behold as well, as you become the very thing that the film directors are trying to channel fear through. There are many more subtle instances of hilarity found throughout the game if you keep an eye out for them. Videogame enthusiasts will chuckle at some of the references to their favourite games, fans of Nickelodeon's cult classic Invader Zim will be overjoyed when they hear the voice of Crypto's commander, and non-Americans will find the final punch line of the game to be rewarding.

Though it was originally released in 2005 Destroy All Humans! 's exceptional graphics look decent even today. The game looks great artistically as well, delivering a very broad scope of architecture, clothing and the retro designs of the 1950s. However, the most remarkable designs of the game have to go to the alien contraptions and technologies, which not only look stunning, but also capture the very essence of the B-movie genre.

Music is one of the secrets to the game's success, as it compliments the game's humor and gameplay in many ways. For example, the music of the game succeeds in adding tension to stealth-based missions, giving a fast pace to the combat sequences, or just channelling the burlesque humor that seeps through the game's visuals and storytelling. The sounds are quite good as well, but players will find the "wrong way, go back" speech to get annoying.

In terms of gameplay, Destroy All Humans! delivers with a wide array of sadistic and devastating weaponry. Whether you want to zap, disintegrate or anal-probe your victims to death on foot, raze buildings in your UFO, or just throw tanks at people, there is a lot of fun to be had. No loading times add to the enjoyment, yet unfortunately the getting in/out of Saucer cutscene is in desperate need of a skip button. This is even more of a problem, considering the small size of the area maps. It only takes a few minutes to travel from one end of to the other on foot and a few seconds in your Saucer, which makes the player feel too restricted when free-roaming. The game's duration becomes an issue as well, as it will only take a few hours to complete the game. While it is lengthened by its free-roam mode, players will find the game to feel rather repetitive after a while. The inclusion of side-missions and collectibles are also included to provide length to an otherwise short game, but these too can become repetitive and frustrating, and lack the same depth and hilarity that the story mode provides so well.

Extras are also an excellent feature for those who enjoy "Making Of" documentaries, concept art and seeing what might have been; the clips are interesting and give a lot of insight into the minds and ideas behind the game. For those who want to see the epitome of low budget films, the full feature Teenagers From Outer Space is included for added hilarity, as well as to give an example of the kind of flick Destroy All Humans! skillfully parodies. Sadly, an inability to control the video clips results in tedious viewing, and the accidental touch of a button can cancel the clip. This results in the need to watch the clip all over again. An avoidable, yet ignored problem.

Bottom Line: A hilarious and fun romp from a different perspective; Destroy All Humans! combines great gameplay with charming characters, plot, bonus features and most importantly, humour. Sadly, the game is short-lived, and players will not find themselves playing it for long.

Recommendation: Buy it. Despite its flaws, Destroy All Humans! remains a hilarious game that is sure to entertain, and is well worth the 1200 Microsoft Points ($15) that it is priced at on Xbox Originals. You can also find the game on the Xbox and PlayStation 2 formats, so keep an eye out.