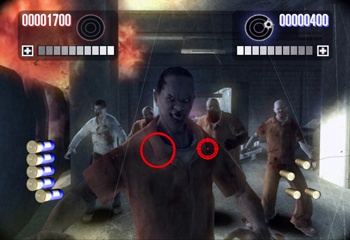 If the Christian Bible's correct, we're smack dab in the middle of the end times. Evidence? The dead seem to have developed a case of cabin fever, and claustrophobic crypts just won't cut it anymore. Zombies are everywhere -- comics, movies, videogames, you name it. So it's no surprise that, every once in a while, one of the shambling undead goes unnoticed among the sardine tin-like atmosphere of the zombie horde. It is, however, unfortunate - especially when that barely mobile bag of bones is as fast, funny, and, ironically, brainy as House of the Dead: Overkill.

As with every other game in Sega's House of the Dead series, Overkill is a no-nonsense light gun shooter. If something moves, your life expectancy will likely improve drastically if it's dead. And really, for those who can't help but groan every time they see words like "Prologue," "Five years ago," or some other phrase that wears its desire to be a Tutorial on its sleeve, Overkill is a huge relief. Shoot zombies in the head and they die. Pop their kneecaps and they fall. Etc. Simple, easy, and intuitive - and if you don't know how to kill zombies, you're in the wrong hobby. Or you're a zombie. Either way, Overkill's probably not for you.

Don't get the wrong idea, though; Overkill's not so simple that a piece of duct tape, your Wii Remote, and a level coffee table could be MacGuyver'd into fending off the zombocalypse. The game is full of nuances that, though they aren't required, give the game's seemingly shallow top hat room enough for more than a few rabbits. Most notably, the game rewards you for (shock) shooting zombies without missing. Channel your inner Robin Hood well enough and you'll get a combo going, which - if you continue to not miss - builds into a screen-shaking, American flag-spewing (yes, seriously) bonus called a Goregasm. Goregasms also give your score a nice boost, but just re-read that last sentence. That's all the motivation you need. Following in a close second on your "Wait, I need reasons to shoot at zombies?" list are floating golden brains, green icons, and health packs, which increase your score, trigger a bullet-time effect, and heal you, respectively.

Really, the only issue one could take with the actual interactive portion of the game is that the main mode's fairly short and somewhat easy. However, a smattering of challenging mini-games, a longer, meaner Director's Cut mode, and of course a co-op mode that'll have you and your friends at each other's throats nearly as often as you'll be shoulder-to-shoulder have the main mode's back, ensuring that a wistful glance backward at your recently spent dollars won't be required.

Even then, though, Overkill is merely an above-average light gun shooter. What really pulls the game out of the bargain bin and into must-own territory is its 70's-era Grindhouse flick-esque presentation. Cheesy and over-the-top, Overkill's story, menus, and music ooze a playful love for blood-splattered, sexed-up horror whose end result is absolutely hilarious.

The game's plot tells the story of Agent G, a straight-laced, enigmatic secret agent with a taste for country music, Isaac Washington, and the disembodied narrator who follows them around. As gut-bustingly funny as G and Washington's buddy cop antics are, their immaterial stalker is one of my favorite videogame characters in years. His loquacious, unnecessarily dramatic interludes go the extra mile in selling the wildly sensationalist spirit of Grindhouse cinema.

But familiar tropes are only the bread on a parody sandwich, and the meat - in this case, the all-too-truthful humor - is where Overkill shines brightest. The game colors its cut-scenes with excessive cursing, missing reels, and discussions of modern feminism with painter-like precision, forming a hilarious whole.

House of the Dead: Overkill's writing is, blow-for-blow, some of the best gaming has to offer. BioShock, Portal, Tim Schafer, and Overkill can - and should be - mentioned in the same breath. The game's over-filled with just as much thought, care, and wit as those other industry high-marks, and succeeds in answering the question: "What's the absolute coolest thing we could do with the light gun shooter genre?"

The game's humor, while at first blush juvenile and F-bomb-reliant, contains many subtleties that assume you're an adult. Similarly, its gameplay handles the player as though he/she is an intelligent, competent individual. The game is at once stupidly childish and boldly mature - and you can bet developer Headstrong Games intended it to be that way. Buy this game. If you enjoy accessible gameplay, laughter, and Samuel L. Jackson's performance in Snakes on a Plane, House of the Dead: Overkill is a no-brainer.

Bottom Line: House of the Dead: Overkill is a competent light gun shooter bolstered by some of wittiest writing in all of gaming.

Recommendation: Buy it. The game's short, but if you want to see more mature, laugh-out-loud funny games on the Wii, please give Sega your money. You won't regret it.

Nathan Grayson was disappointed that Overkill's prison level didn't include any dancing zombies. C'mon! They had orange jumpsuits and everything!