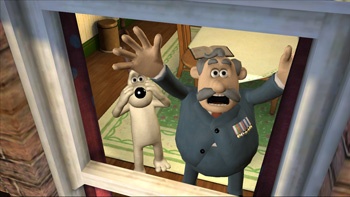 Like Sam & Max before them, Telltale has rescued yet another seemingly irrelevant duo from the depths of the '90s in the form of Wallace and Gromit. Wallace and Gromit's Grand Adventures: Episode One - Fright of the Bumblebees injects the dimwit and dog duo into a world full of witty dialogue, funny puzzles, and of course, the same nauseating tedium that accompanies most adventure games. In spite of the repetitious walkin' and talkin', we keep coming back to this genre for more pointing and clicking. Fright's unique aesthetic and presentation make for a nice change of pace, and once again I've been suckered into the "episodic adventure" scheme.

A slow start to Fright of the Bumblebees makes you wonder whether or not you should keep playing altogether. The first couple of tedious fetch-quests task you with finding three objects and putting them in to place. The predictable trope is every bit as snooze-inducing as you'd expect. And while it's simple enough to find the ingredients required to make Wallace's breakfast, you'll soon see through the veil and realize that annoying inconveniences are arbitrarily elongating the time it takes to complete the game. When an already dreary activity takes a turn for the frustrating by taking away an item you've been trying to track down for 20 or more minutes, it's hard to stay interested in Wallace and Gromit's so-called Grand Adventures.

The monotony of backtracking between Fright's two areas (the town square/Wallace and Gromit's house), however, acts as a tutorial of sorts, walking you through the mechanics of the game in baby-steps so you can gain your footing for the latter half of the game. Fright of the Bumblebees eases newcomers into the sometimes-ridiculous workings of adventure games, like re-exploring areas to pick up a previously useless item, or showing something off to every last living thing in every environment. Genre enthusiasts will find that it's a painful prologue, but the thorn in their side is promptly plucked as you start seeing the variety between the initial collecting. As the pace ratchets up you'll kick the plodding puzzles to the curb in favor of action-based brain-teasers that have you hunting rather than fetching, which crescendos to hilarious high-point during Fright's finale.

That you're periodically switching between the clumsy inventor and his canine comrade is fun as well. While the two are functionally similar, certain situations require their specific skill sets. Two of my favorite moments were only possible with each character: Wallace took part in an insult-based word puzzle while his mute mutt used his smaller size to cram into a tight spot. The clever writing keeps the conversations entertaining, which is a must considering how much chit-chat there is, and the presentation of the game's story-arc and events is executed well enough to make you laugh every time you're supposed to. The game successfully mixes the dry wit of English humor with the silliness that Americans are more inclined to enjoy, so you're getting the best of both worlds without alienating an audience.

In that respect, Fright draws away from its source material a tad, but just about everything else stays true to the Aardman-animated claymation films. Character lip-synch is limited to wide-mouthed flapping; dimples and other anomalies give everyone a genuine clay look; and excellent voice acting gives each person about the town a unique sense of character, so you'll remember new names and faces like Mr. Paneer and Mrs. Gabberly long after you've rolled the credits.

For those unfamiliar with Wallace and Gromit's films, Fright does a remarkable job of introducing the characters without cramming them down your throat. It's easy to start playing and immediately feel familiar with what these dudes are all about, without needing a ham-fisted cinematic drawing out their entire history. Fans will find that Wallace's noticeably different voice is perhaps a bit too perky for the character, but it's something that can be easily shrugged off in favor of embracing what is essentially another movie in playable form. (With no noticeable multi-game story arc, it seems that the four chapters within the Grand Adventures episodic series will be tell their own stand-alone tales.)

Fright of the Bumblebees might take its time getting the story off the ground thanks to a dreary intro, but it's an entertaining adventure that showcases some of the best adventure game-puzzles in recent memory. Though it doesn't quite match the caliber of the newer Sam & Max seasons (there's less to see, less to do, and a weird audio glitch outside the local prison completely flubbed an entire scene for me with incoherent overlap), the solid structure, wonderful presentation and likeable characters adequately kick off another great game in an increasingly long list of episodic adventures.

Bottom Line: You'll need some serious patience in the opening hour, both as a casual newcomer or seasoned vet, but the tip-top pointin' and clickin' ultimately pays off with some of the most fun puzzles in any of Telltale's titles.

Recommendation: Fright of the Bumblebees is an accessible adventure that proves you should stop neglecting this genre, already. If you can't enjoy solving a puzzle where the solution is to shoot bees as if they were TIE Fighters (from a Millennium Falcon that fires oatmeal!) you might want to check with a doctor about your missing heart.

Mitch Dyer's apiphobia did not grant him danger pay during this review.