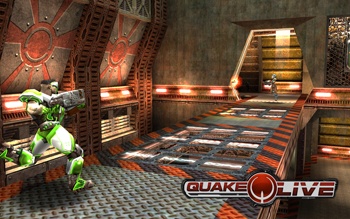 id Software has a history of pushing the boundaries of computer game design, and working on the edge of computing and graphical rendering technology. They've worked on some of the earliest three-dimensional games and spearheaded hardware rendering with Quake, but with Quake Live, they return to one of their older games in order to try a new approach with new technologies.

Quake Live is a browser-based version of Quake III Arena, id Software's fast-paced, action-packed first-person shooter from 1999. Unlike its predecessors, which included substantial single-player campaigns, Quake III was designed from the ground up as a multiplayer game. It took the successful elements of the multiplayer from the previous games in the series, adapting and balancing them to produce a game which would quickly become a favourite for online gamers, LAN parties and competitive tournament gamers alike.

Even after a decade, the gameplay of Quake III stands strong in its new browser-based form. After the increasingly deliberate pace of more recent multiplayer first-person shooters, the fast-paced action of Quake Live is refreshing. Making few concessions to any perceived notion of realism, Quake Live eschews such notions as reloading and realistic physics and replaces them with weapons with ridiculously large magazines, jump pads scattered around the levels and the famous rocket jump.

The biggest change in Quake Live over the original Quake III is the web-browser approach, making it a poster-child of the cloud computing concept. This is not as revolutionary as it ostensibly seems; the graphics are still rendered on the client system and the web browser merely acts to show server lists and game statistics. What this system does add, though, is accessibility. Patches take the form of downloadable packages, ensuring version consistency, and id Software have taken the admirable move of instituting a balancing system, in effect ensuring that the player will never be overwhelmed by superior players unless they choose to do so.

Despite this balancing and id Software's other attempts at accessibility, Quake Live is still a very unforgiving game. The fast-paced action leaves very little time to stop and think, and a rule of successful play is to never stop moving. The compact levels, complete with winding corridors and a myriad of jump pads, mean that engagement is never far away, and there is very little respite from combat.

The different natures of the weapons don't make matters any easier. The starting weapon, a machine gun, is extremely weak and requires sustained fire to score frags, effectively demanding that players quickly acquire other weapons. As for those other weapons, the skill-set to become competent with them all includes the ability to shoot ahead of the target, to acquire targets while rapidly moving in mid-air and precision sniping while maintaining erratic movement.

id Software has still done an admirable job with their level balancing system, ensuring that a player will be paired with opponents who won't dominate the game, yet will still provide adequate challenge, and the more powerful players in the game won't typically be encountered unless a player chooses to play on more difficult servers.

The quick action of Quake Live makes it ideal for this experiment in places where other games would falter. On a well-populated server, a game of Free for All can take five or ten minutes to complete, making it ideal for quick engagements of the sort that a gamer might want to engage in through a web browser on the move. It fits well with the cloud computing model, being a multiplayer game that doesn't require much time investment per match, and while the gameplay may be somewhat dated compared to more modern first-person shooters, it still manages to deliver fun even ten years after the initial release of Quake III.

Recommendation: Try it. It's a free download from id Software, currently with a Windows version and Mac OS X and Linux versions under development.